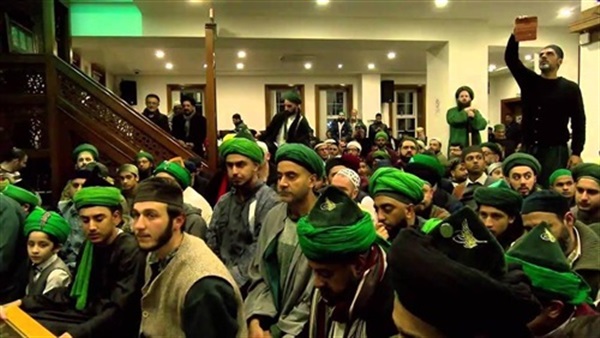 The new coronavirus placed the whole world on the alert and prepared to take precautionary and preventive measures to besiege it, which included the issuance of strict governments decisions to cancel all activities, celebrations and mass gatherings, to prevent the spread of the virus among its citizens.

Among the most prominent festive phenomena around the world are religious celebrations known in Arabic as Moulid, which gather a large number of people to hold specific ceremonial rituals.

Religious moulids in European countries are a kind of popular folklore. For example, there is the birth of Mawlana Rumi and the birth of Sheikh Naqshbandi, Sheikh Al-Fidhari and other celebrations that attract citizens to it.

Mustafa Zayed, a researcher in Sufi affairs, said that the Europeans have a special character in the celebrations of moulids, unlike the nature of the Arabs and Egyptians, noting that the European celebration of the birth is a male episode held in the mosque, in which the children of the method gather.

He added in a statement to the Reference that the elders of the Sufi orders in Spain were supposed to celebrate the birth of Sheikh Naqshbandi during the month of March, but this celebration was canceled.

Zayed pointed out that the only European country with mystical shrines is Spain due to its proximity to the Arab Maghreb, where it was within the Islamic conquests and buried many of the Sufi sheikhs, explaining that European countries celebrate moulids according to the person’s birth or death.

The researcher in Sufi affairs stressed that when European countries issue a decision, they implement it strictly, that no one can break it, so the Sufi sheikhs canceled celebrations of moulids, fearing the spread of coronavirus.

Alaa Abu Al-Azim, President of the World Federation of Sufi Methods, explained that the gatherings of sheikhs in Europe and the United States take place inside conference halls of hotels, noting that the majority of European countries celebrate only the Prophet’s birthday and the Islamic New Year.

He added in a statement to the Reference that Arab countries, including Egypt, will not celebrate the birth of Mrs. Zainab, the daughter of Prophet Mohamed, this year, in order to avoid and guard against the spread of coronavirus.

The General Sheikhdom of the Sufi orders in Egypt decided, on Tuesday 10 March 2020, to cancel the celebration of the birth of Sayyida Zeinab, due to be held on Tuesday 24 of the same month.

“The one who visited and tempered was rebuked,” Abdullah al-Nasser, head of the Sufi Orders Coalition, demanded that citizens wishing to celebrate the birth of Sayyida Zainab should not exceed 15 minutes or less, indicating that all Sufi sheikhs would abide by the decision to cancel the celebration.

“Al-Nasser” added in a statement to the “reference”, that human life is more important than any religious celebrations, stressing that the gatherings may help the possibility of the virus, therefore the celebration will be less than the previous years, and it will not be allowed to overnight the murid in front of the mosque like what He was used to it before.

Sufi orders are bound by the decision

“Preventing harm is bound to bring benefit,” said Sheikh Abd al-Khalek al-Shabrawi, Sheikh of the Brahmi tariq al-Burhami, on the decision to cancel the celebrations of the birth of Sayyida Zainab, confirming that the roads will abide by the decision.

He added to the “reference”, that each deputy will follow a method and successor in the governorates, to assure citizens that the birth of Sayyida Zainab will not be celebrated this year, adding that sterilization and disinfection tools will be distributed for the citizens who may attend.

He pointed out that Islam urges purity and cleanliness, so every Muslim must take care of personal hygiene, as prevention is better than cure.

Celebrations inside the mosque only

Muhammad Abdul Majeed Al Sharnoubi, Sheikh of the Sharnobi method, commented that his method will celebrate the birth of Sayyida Zainab inside the mosque this year, and will not hold any gatherings outside, noting that it is not logical with these precautionary measures to gather more than two million people in a small square.

He added to the “reference”, that the celebration will be on the night of March 27 and inside the Al-Hussein Mosque and not Mrs. Zainab, demanding that every citizen who wishes to celebrate the birth be in his province and his home, noting that canceling the celebration of the birth was not the first time, as it was canceled with the emergence of a virus Avian and swine influenza in Egypt, as it was abolished in 1966 due to the spread of the plague.