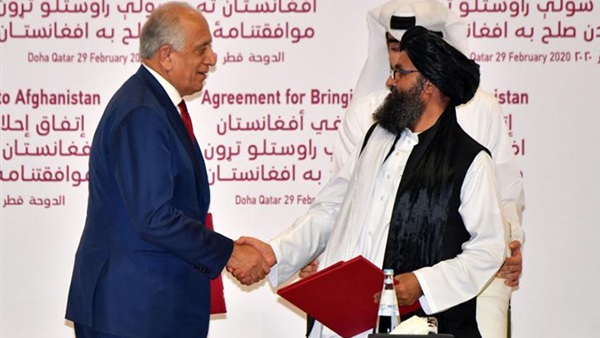 After Washington-Taliban agreement: A map of expected unrest in Afghanistan

“The matter is comfortable for both parties,” a brief diplomatic statement in which the spokesperson for the political office of the Afghan Taliban movement, Suhail Shaheen, responded to a question asked by the American CNN network about the winner or the biggest loser in the peace and withdrawal negotiations between the movement and Washington and the controversial provisions it left.

On Saturday, February 29, 2020, the Taliban signed a dialectical agreement with Washington stipulating the withdrawal of the latter’s forces and employees from Afghanistan within 14 months alongside all foreign military forces, reducing the number of American soldiers in military bases to 8,600 individuals, and the release of thousands of prisoners from the movement, in exchange.

The Taliban pledged not to use the state’s lands as a terrorist station to harm the interests of any country, besides entering into direct negotiations with all political factions in the country to draw up a road map for the future.

After 19 years of intense fighting between the two sides, Washington decided to withdraw from Afghanistan and negotiate with the party that originally came to fight it, and even entered into separate negotiations with it from the political party that put it for years in power, which is the Afghan government.

In light of that position, many of the angles governing this latest agreement emerge. First, the items that some politicians have classified as a shameful defeat for the United States or a temporary withdrawal from the geography that it created to achieve strategic interests that have expired, compared to another era, which means from the point of view of political researcher Muhammad Faraj Abu Al-Nur in a statement.

He told The Reference that the Taliban was primarily American industry, and later managed to control large parts of the country in exchange for declining control by the government.

And through the items it is stopping in Washington, it is still subject to its basic police condition.

Accordingly, it is possible that Afghanistan will witness a kind of internal warfare between the forces supporting each stream in light of the non-resolution of matters and the marginalization of the government during the negotiations period and Washington abandoned it.

It is true that the terms of the agreement include internal negotiations between the powers, but the outcome seems not guaranteed, and this takes place as long as the Taliban controls the reins of affairs on the ground as well as signing an agreement from one side.

Concerning the third angle, it is the regional situation, as it is one of the major neighboring countries, namely Russia, China and Iran, and it has strong ties to the Taliban.

In light of this, Reuters published on the first of March 2020 news that the Iranian government rejected the agreement signed between the two parties, considering it a loss of legal basis, noting that the provisions are merely legalizing the conditions of the American forces in the region.

The fourth corner remains subject to the movement’s aid and its relations with other terrorist groups in the region, specifically Al-Qaeda. Its territory to fight other countries is an enemy and must be confronted.