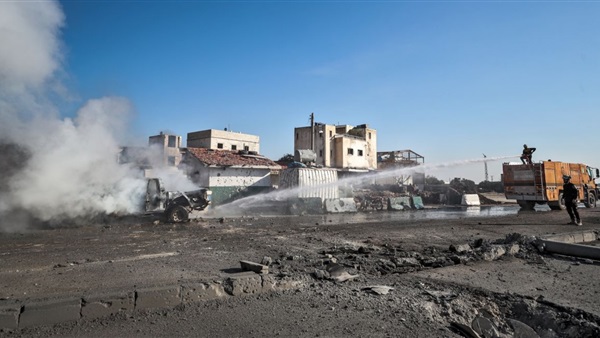 The frequency of conflicts between the warring forces on the Syrian soil, especially in the north of the country, has increased since December 2019, and is still continuing in light of the threats and mutual bombing between the main axes of the conflict, which are represented in the Turkish axis supporting a number of terrorist groups, and the Syrian side, which is currently supported by Russia.

Everyone takes from the evacuees’ card an airbag that he unleashes in the face of the other factions, and each faction considers itself more keen on the conditions of the evacuees than the other, to win international sympathy or appear as concern for the humanitarian conditions of the victims of the conflict.

During the last month, conflicts started to reflect on civilians, especially in the old and new camps alike, due to the lack of international and local support, and the increase in the number of displaced people, as a result of the burning military operations in both Idlib and Aleppo.

The most prominent ongoing crisis facing civilians in northern Syria is the seizure of humanitarian relief materials sent by international organizations, through the so-called Salvation Government of the Headquarters for the Liberation of Al-Sham (one of the factions classified as terrorist lists) supported by Turkey.

Local Syrian reports confirmed that dozens of humanitarian organizations because of the practices of al-Sham Liberation Group were forced to stop their projects in Idlib, and other organizations were forced to deal with the de facto situation, and to give up part of the relief materials as a royalty to the rescue government and the authority in exchange for the continuation of its humanitarian projects that benefit thousands of civilians in the country.

Syrian websites reported that one of the relief organizations suspended their activities after the Headquarters for the Liberation of Al-Sham stipulated paying $20,000 to allow them to distribute school bags and tools to students in Idlib villages.

Bleeding of the displaced

A report issued by the United Nations Office for the Coordination of Humanitarian Affairs stated that more than 900,000 people have been displaced in northwestern Syria, including about half a million children; as a result of the escalation of violence in Aleppo and Idlib since December 2019, and the number of displaced during the month of February 2020 reached about 1.1 million, according to the Syrian Observatory for Human Rights.

Mark Cuts, the deputy regional coordinator for humanitarian affairs in Syria, described the new wave of displacement in Idlib as “mass migration” and called for international action.

He said in statements carried by Syrian media, “We constantly call on the Security Council to protect civilians” and asked, “What is the fate of this world if we are unable to protect 3 million civilians – most of them women and children – trapped in a war zone?”

The escalation of violence in the region coincided with the onset of the winter season, which increased the suffering of the evacuees who reside in the camps, especially children, women and the elderly. According to the statistics of the Syrian Observatory, the 9 most displaced people, most of them children, died due to bad weather during the month of February.

The British Financial Times also published a report entitled “The Last Battle of Syria”, during which it reviewed the tragedies of Syrian refugees and the conditions of civilians in Idlib, stressing that the Syrians besieged in the region no longer have any place to take refuge.

The newspaper pointed out that Idlib, which was a haven for hundreds of thousands of people who survived other battles, is today the scene of a humanitarian catastrophe.