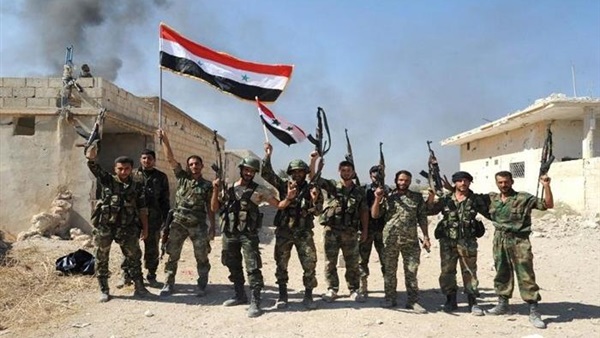 As battles still continue in the city of Aleppo between the Syrian army and armed terrorist factions backed by Turkey, the army has made significant progress in many areas of the city in the northwest of the country.

The armed factions loyal to Ankara retreated as the Syrian army forces took control of six important areas in the western countryside of Aleppo, which prompted the Turkish army to launch artillery shells targeting the villages of Kafr Aleppo and Miznaz on Sunday morning, February 16. Meanwhile, the terrorist group Hayat Tahrir al-Sham (HTS) detonated a car bomb to make up for its losses, according to the Syrian Observatory for Human Rights.

Battles began on Saturday night, February 15 between the Ankara-backed armed factions in the village of Uwayjil in the western countryside of Aleppo and the Syrian army. The Syrian army also fought fierce battles with HTS militants at the western gate of Aleppo, and it was able to establish control over the town of Mansoura and the Al-Buhuth al-Elmiya and Rashideen districts, which are considered HTS’s most important strongholds for carrying out missile attacks against the city’s western neighborhoods.

The Syrian army made progress west of the international road, specifically west of the town of Khan al-Asal, with the aim of taking control of Aleppo. The neighborhoods of Ajil, Uwayjil, Halaqim, and Jamiyat Rihal were restored after the Turkish-backed factions were eliminated. The army also took control of the village of Saadiya, while clashes continue in Uwayjil. Those who remained fled to the towns of Tafad and Basratun near the Turkish-Syrian border, and thus the army was able to extend its control to many areas in the southern and western countryside of Aleppo, according to the Syrian Observatory for Human Rights.

The official Syrian news agency SANA, said in a statement on Sunday, February 16, that the Syrian army forces expanded their operations in the western and southern countryside of Aleppo, noting that they had taken control of the major villages of Urem, Kafr Naha, Jamiyat Radwan, Ajil, and Uwayjil.

In early February, the Syrian army thwarted separate attacks by HTS members west of Aleppo by destroying three car bombs before they were able to reach their targets in the Jamiyat al-Zahra suburb of Aleppo. HTS had announced that two of its suicide bombers carried out two of the attacks, while the third car bomb was detonated by remote control.

On the other hand, Ankara’s loyal armed factions, headed by HTS, launched a military operation in the western countryside of Aleppo, taking advantage of the support of Turkish forces stationed in Darat Izza and Abyan Samaan, by targeting Syrian army locations in an attempt to retake control the areas they lost.

The Syrian Observatory for Human Rights said that the Turkish-backed factions and jihadist groups launched a Turkish artillery attack on Kafr Halab in the western countryside of Aleppo, noting that the clashes are still ongoing. Meanwhile, the Syrian army was able to open a new front in northwestern Aleppo in an attempt to advance the forces from western Aleppo to join with the forces northwest of Aleppo and besiege the towns of Anadan, Hayyan, Haritan, Kafr Hamra, and several other villages in that area.

The observatory stressed that if the Syrian army forces could control this area, they would have completely secured Aleppo.