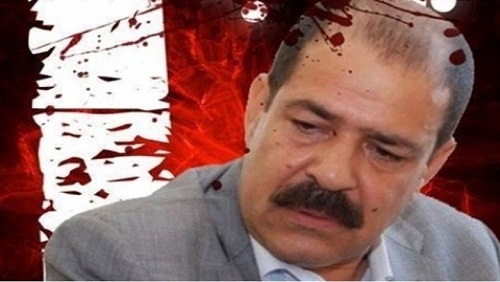 Shoukri Belaid is a former member of the Tunisian Supreme Commission for the Achievement of the Objectives of the Revolution, Political Reform, Democratic Transition, and the Secretary-General of the United National Democratic Party, and one of the founders of the Popular Front Movement and member of the Board of Trustees.

He was a strong critic of the performance of the coalition government in Tunisia. He follows the Marxist-Leninist current, who was assassinated in front of his house by ISIS, which was followed by massive demonstrations in the country and the announcement by the Tunisian General Labor Union of entering a general strike on the Friday following his assassination. That is the prominent politician and lawyer, Shukri Belaid (November 26, 1964 – 6) February 2013).

Belaid was born in Jebel Joulouad, Tunis Governorate and his father was born in the Sidi Abid region of the delegation of Bou Salem from the governorate of Jendouba. He studied law in Iraq and completed his education at the University of Paris. He was opposed to the regime of Habib Bourguiba, who imprisoned him for a period.

He led the first marches condemning the American war on Iraq. He defended those convicted of the incidents in the mining basin in Gafsa in 2008 and prisoners affiliated with Salafi jihadism. The spokesperson and general coordinator of the “National Democrats” movement, nominated in the elections for the National Constituent Assembly at the top of a joint list with the Arab Democratic Party.

He was elected Secretary-General of the United National Democratic Party on September 2 2012, then he actively contributed to the founding of the People’s Front to complete the goals of the revolution, a front that brings together the Marxist and Nationalist Left parties.

On February 6, 2013, he was killed in front of his house, with four bullets, one in the head, one in the neck, and two bullets in the chest, which left many reactions about the identity of the two killers who targeted him as he left his home in the sixth park in Ariana governorate.

In September 2014, Omar Sahabo accused the Tunisian media and political party Nidaa Tounes of killing the martyr through his Facebook page.

Tunisian jihadists who said they joined ISIS, in a video referred to by news agencies, claimed responsibility for the assassination of Tunisian opponents Shukri Belaid and Mohamed Brahmi in 2013.

Abu Muqtil said, “We assassinated Shukri Belaid and Muhammad Brahmi,” and the father of a terrorist fighter wanted by the Tunisian authorities on charges of involvement in the attack on the two opponents. This is the first public recognition of the assassination of Shukri Belaid and Mohamed Brahmi, who were both secular opposition during the period of the Islamic Renaissance movement.

The Tunisian Ministry of the Interior stated that Abu Muqtil, whose real name is Abu Bakr al-Hakim, is a “terrorist” element. In the video, the jihadist appeared to be surrounded by three other armed men in uniform. Abu Muqeem has vowed to assassinate others, calling on the Tunisians to pledge allegiance to ISIS.

The executive offices of several Tunisian parties, including the Nidaa Tunis party, have held meetings to determine the positions of their parties regarding the incident. Several demonstrators marched in Habib Bourguiba Street in Tunis, chanting the slogan “the people want to topple the regime” and skirmishes between protesters and security forces in Tunis neighborhoods, which resulted in the death of the security overseer Lotfi El-Zar and the wounding of other security agents.

Demonstrations took place in several other Tunisian cities to condemn the killing of Belaid. On February 6, several headquarters of the Ennahda movement were burned, including the regional headquarters of the movement in the states of Monastir, Sousse, Kef and Gafsa. On the day of the accident, the National Constituent Assembly demanded, in a communication, after a prolonged meeting at his office, that those involved in the accident be disclosed.

After the extraordinary session on February 7th, the Tunisian General Labor Union, the governing body of the Tunisian General Labor Union decided to hold a national funeral for Belaid and make it a day of mourning. The National Syndicate of Tunisian Journalists decided on February 8th for a strike day for journalists. Mustafa bin Jaafar, president of the National Constituent Assembly, called for the mourning to be announced on February 8.

For his part, French President Francois Hollande condemned the incident and said that his death would deprive Tunisia of one of the courageous voices calling for freedom in the country. In a statement to the Elysee Palace, it expressed its fear of the possibility of escalating political violence in the country. The French embassy in Tunis announced that the French schools in Tunisia will be closed on February 8 and 9.

In a statement issued by UN Secretary-General Ban Ki-moon’s spokesman on February 6, 2013, the United Nations said that the assassination was a dangerous precedent in the history of Tunisia.