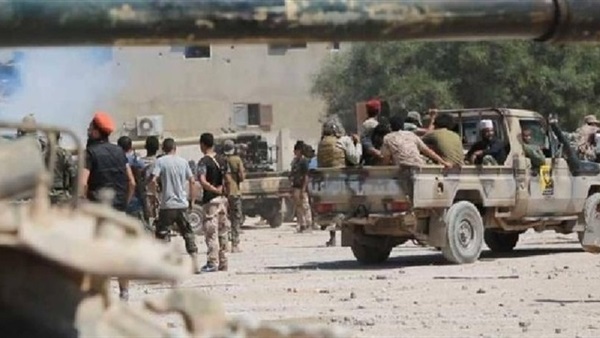 The Doha-Ankara-backed Al-Wefaq militia continues to commit humanitarian crimes against civilians, as the Libyan National Commission for Human Rights announced an escalation of killings and arrests, arbitrary detention, kidnapping, and enforced disappearance, in Sirte, Qarat Bulli, Tarhuna, and Tripoli.

The Commission condemned in a statement, on Saturday, February 15, the escalation of killings based on social identity and political attitudes, outside the law, by armed groups, calling these practices “full-fledged war crimes.”

According to the commission’s statement, the abductees and detainees are at risk of torture and ill-treatment, and inhumane conditions of detention.

On November 9, 2019, Libyan media revealed that an armed group affiliated with the Al-Wefaq government forces had kidnapped the president of Al-Zaytuna University and its facilities in Tarhuna city, and they were on their way to the eastern region, confirming the return of the policy of kidnapping, intimidation and enforced disappearance by the Al-Wefaq militia.

In May 2017, faculty members at the University of Tripoli organized a protest to denounce the continued kidnappings and enforced disappearances, and a statement by the protesters considered that targeting the university is targeting the state in its highest educational institutions and the best of its scientific elite.

In a report published on Monday 5 May 2017, Amnesty International revealed the high number of kidnappings of professors and members of the teaching staff of Libyan universities by armed militias.

The report spoke about Dr. Salem Muhammad Bayt al-Mal, a professor at the University of Tripoli, who was kidnapped near his house west of Tripoli.

Amnesty called on the Al-Wefaq government to thoroughly investigate all kidnappings of civilians and ensure a speedy and safe return to them, and called for help to end violations by ending support for the militias responsible for these criminal acts.

On Monday, February 10, 2020, the military police in the Libyan city of Benghazi arrested a terrorist named Mohamed Sobhi, who holds Egyptian citizenship, and was responsible for what is known as “transportation” in the “ISIS” organization.

The terrorist, who illegally entered Libyan territory and was a member of the “Ibrahim Ahnish” militia, led by the leader of the “ISIS” organization, Muhammad Salem Bahron, which is affiliated with the Al-Wefaq government in Tripoli, admitted to rape crimes he committed against a Libyan woman.