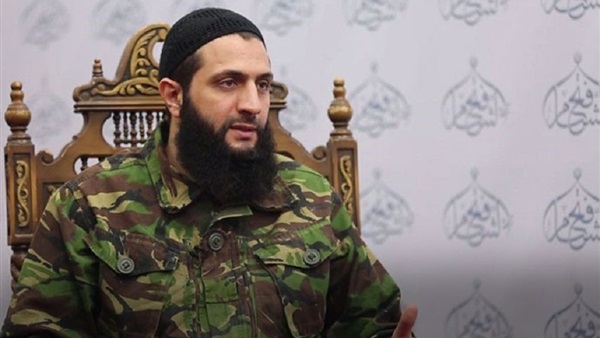 Terrorist figures in Syria have been claiming that Abu Mohammad al-Julani. commander-in-chief of the Syrian militant group Tahrir al-Sham, is getting ready to leave Syria after the Syrian Army managed to liberate Aleppo and advance into Idlib.

Syrian rebel negotiator Mohammad Alloush claimed that Julani is negotiating his way out of Syria and that he is demanding $100 million, raising questions regarding who might pay him and where will he go next.

Armed militias and factions accused the HTS of being involved in dismantling factions, the matter which made it easier for the Syrian Army to infiltrate terrorist locations and hideouts.

He added that the HTS has managed to dismantle more than 21 factions either by arms confiscation or betrayal accusations, pointing out that this served the mission of the Syrian Army.

These victories confused the rows of terrorists, as Telegram chat rooms were filled with requests to dispatch help and support by the same leaders who persuaded young people into fighting alongside the terrorists and rebels with emotional speeches.

Once again, sheikhs, including Saudi Abdullah Al-Muhaisni, sent, on their channels, Telegram, invitations to go to Syria. In this regard, Al-Muhaisni touched on a story he told about a young man he allegedly met and told him that he was coming from Turkey for the war in northern Syria. Al-Muhaisni used this story to raise the morale of the terrorists after their defeat in Aleppo.

Professor of Political Science Nourhan Al-Shiekh told The Reference in an interview that the series of dissensions within the rows of terrorists and militants in Syria is a good thing that makes the road easier for the Syrian army to liberate the north.

She further added that any attempt to seek encountering the Syrian army, supported by Russia, is doomed to failure, pointing out that Turkey is the only factor that keeps these armed militias together.

Al-Sheikh stressed that all data indicate that the factional presence in Syria has become temporary and will end soon, indicating that the duration of this presence depends on the size of the Turkish support and the steadfastness of the factions.

She also said Syria is witnessing a historic turning point that would determined the fate of their country, the fighting militants and their next destination.