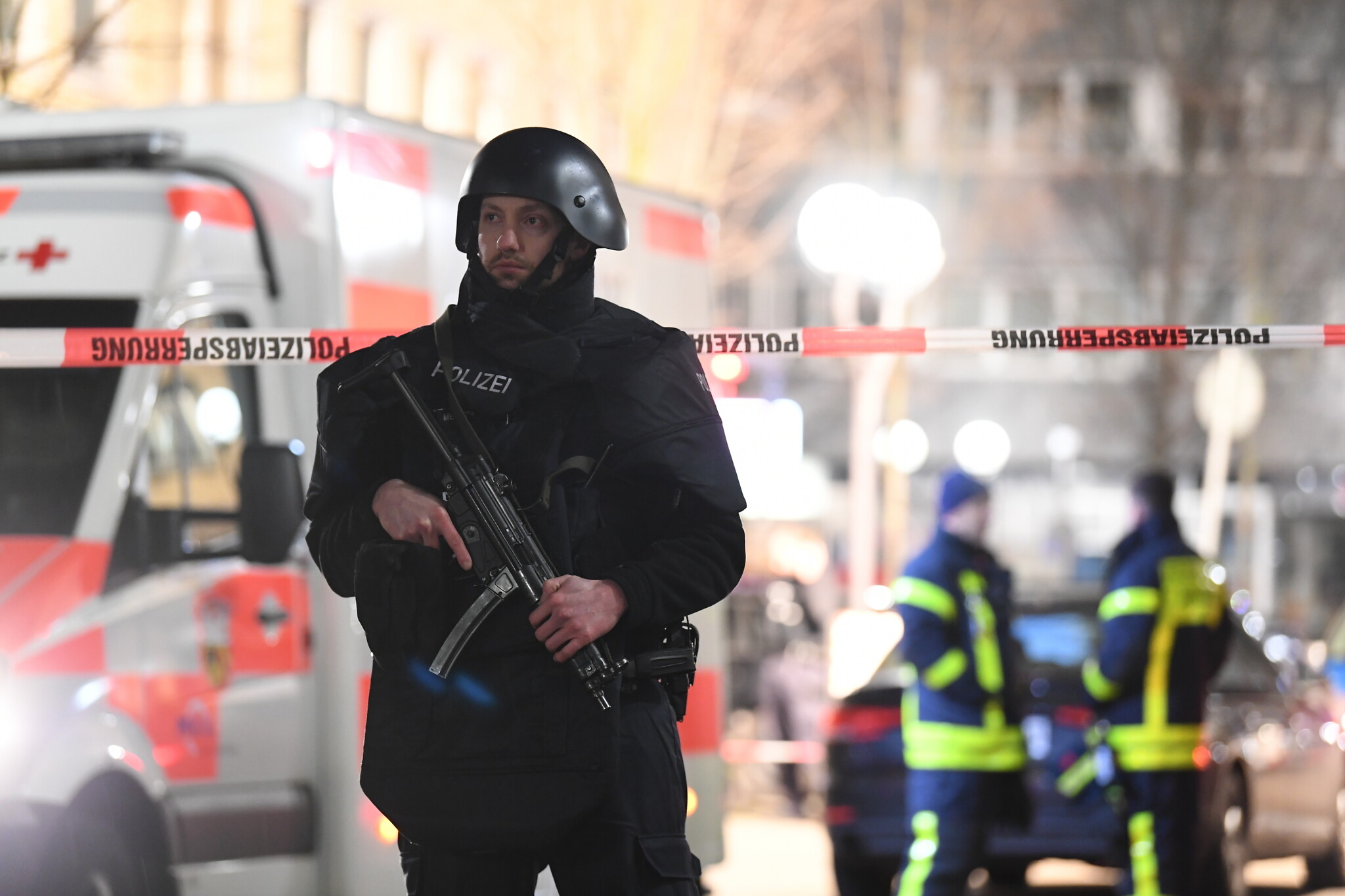 A police officer stands guard near the scene in front of a restaurant after a shooting in central Hanau, Germany Thursday, Feb. 20, 2020. Eight people were killed in shootings in the German city of Hanau on Wednesday evening, authorities said. (Boris Roessler/dpa via AP)

The German government is investigating last night’s deadly shooting as a right-wing terrorist attack. It happened at two hookah bars in a town outside Frankfurt and left 11 dead, including the shooter and his mother. NPR’s Rob Schmitz reports.

At 10 o’clock last night, the suspect, a 43-year-old white German man, attacked one hookah bar in the town of Hanau and then another hookah bar, killing nine people and injuring six others, one of them critically. He then drove home to his apartment. That’s where police found his body and the body of his 72-year-old mother. Beside them was a semiautomatic handgun.

Media are reporting the victims in the bars were from Germany’s Turkish and Kurdish communities. Turkish broadcaster TRT Deutsch interviewed a survivor of the attack, identified as Muhammed B., from his hospital bed.

The first people he saw, he shot in the head. Then he crouched down and came over to us and started shooting at us. I hid behind a wall. As I did, he shot me in the shoulder. I fell on top of someone else. The man underneath me was shot in his throat. He said, brother, I can’t feel my tongue. I can’t breathe.

This attack comes amidst a rise in far-right extremism in Germany. According to government data, the number of right-wing extremists in the country has risen by a third in the past year alone. German intelligence now suspects there are more than 32,000 right-wing extremists throughout the country. Half are considered potentially violent. Chancellor Angela Merkel addressed this spike in far-right sentiment in a speech today.

Racism is a poison. Hate is a poison. And this poison exists in our society, and it’s responsible for many crimes. The German government and all state institutions stand for the rights and dignity of all people in this country. We do not differentiate between race, heritage or religion. We stand unified against those who attempt to split Germany.

Gun laws in Germany, among the most stringent in the world, have been tightened further in recent years after other mass shootings. Germany’s government is also in the midst of overhauling its domestic intelligence and law enforcement agencies to improve their detection of right-wing extremists. The Bundestag, Germany’s parliament, has approved 600 new positions to help tackle the rising problem. Federal prosecutor Peter Frank says the suspect behind the Hanau attacks left behind videos and a confession showing a pattern of racism.

The videos and manifesto the alleged suspect posted on his website point to an individual whose thinking was very confused and who was a believer in absurd conspiracy theories. But it was also evident that he held deeply racist beliefs.

According to German media, in one video, the suspect talks about secret societies in the U.S. that use mind control and underground military bases that kill children. Frank says his office will investigate the suspect’s background to determine if he has supporters or accomplices.