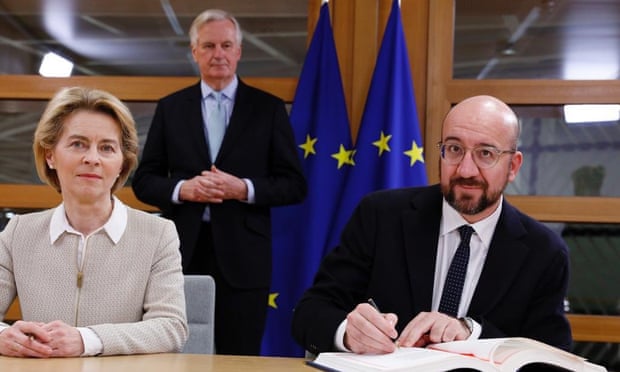 A sombre Ursula von der Leyen and Charles Michel, the leaders of the European commission and council, have formally signed the withdrawal agreement as Brussels prepares for the UK’s exit from the EU in seven days’ time.

In photographs issued of the signing ceremony in the EU’s Europa building on Friday morning, the bloc’s chief negotiator, Michel Barnier, can be seen standing behind the two presidents.

Charles Michel, who as president of the European council will now chair meetings of 27 rather than 28 heads of state and government at the regular summits in the Belgian capital, issued a short statement. “Things will inevitably change but our friendship will remain. We start a new chapter as partners and allies,” he said.

Von der Leyen tweeted: “Charles Michel and I have just signed the agreement on the withdrawal of the UK from the EU, opening the way for its ratification by the European parliament.”

The signed copy of the agreement was sent in a diplomatic bag to Downing Street for the prime minister’s signature. On Thursday the withdrawal agreement received royal assent from the Queen.

The document, which runs to nearly 600 pages, contains among other issues agreements on citizens’ rights, the UK’s £33bn worth of financial obligations to the bloc and the Northern Ireland protocol, establishing the arrangements for maintaining an open border on the island of Ireland.

The European parliament’s constitutional affairs committee backed the agreement on Thursday by 23 votes in favour to three against, setting up the final act next week when a plenary session of the EU parliament stages its final vote to ratify the deal.

Under the agreement, the UK will leave the EU at midnight central European time on 31 January. The UK will remain in the EU’s single market and customs union, but none of the decision-making bodies, until the end of 2020.

Boris Johnson has said he will not take the option available to him in the withdrawal agreement of extending this transition period. The prime minister has said the 11-month period available without further extension is “ample” time to reach agreement on a comprehensive deal.

The EU’s negotiating position, known as a mandate, is due to be adopted on 25 February by EU ministers attending a general affairs council, and formal negotiations will then begin on the future relationship.

A political declaration on the outlines of the future relationship, which has already been given the political seal of approval in London and the EU capitals, will set the parameters of the talks to come as the two negotiating teams seek to replace the terms of the UK’s 45 years of membership with new arrangements.