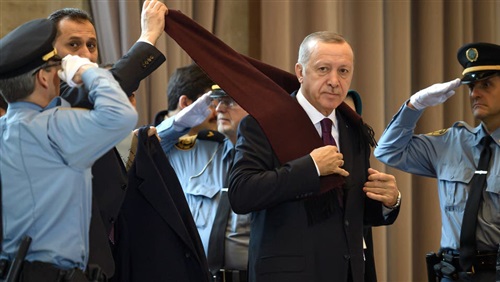 No evidence of Sudan paramilitaries fighting in Libya: UN

A United Nations panel said it had no “credible evidence” of Sudanese paramilitaries fighting in Libya for Khalifa Haftar as alleged by some media outlets backed by Turkey.

Several Libyan and regional media outlets had claimed in recent months that hundreds of Sudanese paramilitaries from the Rapid Support Forces (RSF) were deployed in Libya to fight alongside Haftar’s Libyan National Armed Forces.

But a UN panel of experts on Sudan dismissed these claims in a report released.

“The panel has no credible evidence of the presence of Rapid Support Forces in Libya,” the report said.

It said there were, however, many Arabs from Sudan’s conflict-wracked region of Darfur and neighbouring Chad fighting as “individual mercenaries” in Libya and they belonged to the same tribes that made up a majority of RSF personnel.

The report said Darfur itself did not see any large-scale outbreak of violence during the reporting period — March to December 2019 — although the region saw intercommunal skirmishes, militia attacks on civilians and tensions in major camps housing people displaced by the conflict.

“The movement has been able to strengthen its military capability by acquiring new weapons and ammunition from local militias and engaging in a recruitment drive,” the report said.

The UN envoy to Libya Ghassan Salame talked to 218News in an exclusive interview on Monday about the Berlin conference on Libya, saying its conclusions are now a challenge to the UNSMIL to imeplement on the ground amid the fragmented international community stance.

Salame said the conference in Germany was a success as it achieved the target of bringing an international umbrella to protect the agreements reached by Libyans, adding that the goal was to repair the fractured international community stance toward Libya and bring Libyans into some common ground.

He added that the Security Council convented 15 times without issuing a resolution to cease fire in Libya, so they needed another place to reach new resolutions and Chancellor Angela Merkel supported the idea and agreed with the UNSMIL on all points before kicking off the conference.

Regarding the invitation of the General Commander of the Libyan National Army Field Marshal Khalifa Haftar and Head of Presidential Council Fayez Al-Sarraj to Berlin, Salame said many international parties pressured to make that happen but it wasn’t his own idea. They were later informed of the conclusions of Berlin conference after they had met with several international actors.

Salame said there are assurances that the results of Berlin conference will be respected as an operationalization annex has been approved and all Libyans have been informed of its steps, saying the Security Council will convene to give the Berlin conference conclusions legitimacy, let alone the follow-up commission that will see through the implementation of the results in Libya.

Salame said many international parties pressured Field Marshal Haftar to name five officers for the forming of 5+5 Commission that will be tasked with facilitating the security and military track, turning the truce into a permanent ceasefire, disarming groups, dismantling militias, imposing the implementation of the arms embargo and unifying the security and military institutions.

He added that there will be a political attack as well with 40nfrom all parties going to Geneva to discuss the entanglements like elections, constitution draft and the upcoming government.

Salame talked about the European statements about sending troops to Libya, saying Libyans are not ready to accept foreign troops and the Security Council isn’t also ready to send them, indicating that he can’t see blue helmets any time soon in Libya.

He added that Libyans should develop their understanding of the international politics and get rid of the magic wand idea, referring to the inability of the international community to resolve Libya’s conflict, adding that if the 5+5 agreed on something, he will implement it the next day.

Erdogan was invited to Berlin because he was threatening to send Syrians to Libya. He vowed in Berlin not to intervene or send mercenaries.” Salame said about the Turkish President, adding that he can now hold him accountable after the signing of the agreement.

“The signing of the MoUs between Libya’s GNA and Turkey complictaed the situation and escalated things, as the maritime MoU affects the interests of European countries, including Cyprus and Greece, adding that the fate of the MoU lies at the International Criminal Court as both Libya and Turkey haven’t signed the seas treaty.

He added that the UNSMIL is going to propose an initiative to the 5+5 Commission to make all foreign fighters leave Libya, including Syrians and thousands of others.

Salame said Libyans are making mistakes by using oil to settle political conflicts, hoping they could understand that the oil brings food to all of them, adding that the economic track is now working on mechanisms to achieve fair distribution of wealth across the country.