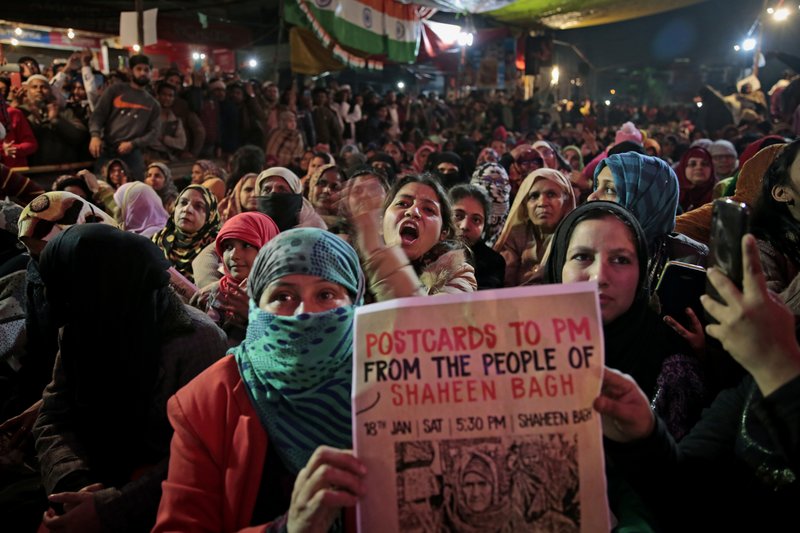 In the Indian capital’s Shaheen Bagh neighborhood, beside open sewers and dangerously dangling electricity wires, a group of Muslim women in colorful headscarves sit in resistance to a new citizenship law that has unleashed protests across the country.

For more than a month the women have taken turns maintaining an around the clock sit-in on a highway that passes through their neighborhood. They sing songs of protest and chant anti-government slogans, some cradling babies, others laying down rugs to make space for more people to sit.

The movement has slowly spread nationwide, with many women across the country staging their own sit-ins.

Through numerous police barricades, women trickle in from the winding arterial alleys of Shaheen Bagh with children in hand, as poets and singers take the makeshift stage, drawing rapturous applause.

The neighborhood rings with chants of “Inquilab Zindabad,” which means “long live the revolution!”

As night draws closer, women as old as 90 huddle together under warm blankets, falling asleep on cheap mattresses.

The women, like demonstrators elsewhere in the country, have been demanding the revocation of the citizenship law approved last month. The law provides a fast-track to naturalization for persecuted religious minorities from some neighboring Islamic countries, but excludes Muslims.

Nationwide protests have brought tens of thousands of people from different faiths and backgrounds together, in part because the law is seen by critics as part of a larger threat to the secular fabric of Indian society.

“Someone had to tell the government that their black laws won’t be accepted. So, as mothers, we decided to protest,” said Najma Khatoon, 62.

Khatoon and other protesters in Shaheen Bagh view the citizenship law as part of a bigger plan by Prime Minister Narendra Modi’s Hindu-nationalist government to implement a nationwide register of citizens, which they fear could lead to the deportation and detention of Muslims.

Modi and other leaders of his Bharatiya Janata Party have repeatedly said Indian citizens won’t be affected by the new law, and that if a nationwide register is ever conducted, there will be no religion column.

The gathering at Shaheen Bagh started with a handful of women appalled by the violence at a nearby Muslim university during protests against the law on Dec. 15.

A common refrain among the women at Shaheen Bagh is that they are there to ensure that the secular India plotted out by independence-era leaders remains for younger generations.

A makeshift library houses people who read about the constitution. The space is decorated with art and installations — from a mock detention camp to a mini replica of India Gate, Delhi’s famous World War I monument, inscribed not with the names of soldiers but of those killed in the nationwide protests.

What would halt the protests — short of a revocation of the law by the Supreme Court, where it has been challenged in nearly 60 petitions — is unclear. But there is no indication the women will up and leave anytime soon.