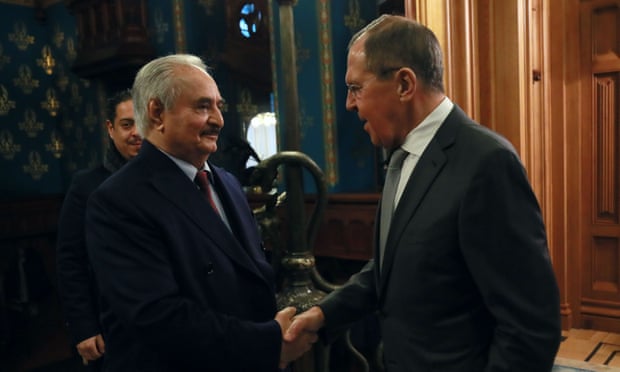 Libya’s eastern strongman Gen Khalifa Haftar has left Moscow without signing a ceasefire agreement to end nine months of fighting in the country, leaving the future of a fragile truce uncertain..

The commander’s abrupt departure in the early hours of Tuesday was a setback for an international diplomatic push in recent days, though Moscow insisted it would continue mediation efforts.

Haftar and his allies were in Moscow on Monday for talks with the UN-recognised government headed by Fayez al-Sarraj and based in Tripoli.

Sarraj’s government has been under attack since last April from forces loyal to Haftar, who is based in the east of the oil-rich north African country with his own loyalist politicians.

The two sides agreed to a ceasefire brokered by Russia and Turkey that took effect at the weekend and were in Moscow to sign a long-term agreement.

The talks raised hopes of an end to the latest fighting to wrack Libya since a 2011 Nato-backed uprising killed longtime dictator Muammar Gaddafi.

But after seven hours of negotiations, only Sarraj had signed on to the agreement and Russian officials confirmed to AFP that Haftar’s delegation had left without signing the deal.

“We will pursue our efforts in this direction. For now, a definitive result has not been achieved,” the Russian foreign minister, Sergei Lavrov, said at a press conference in Sri Lanka.

Russia, European powers and Libya’s neighbours “are working in the same vein and motivating all Libyan sides to agree rather than continue sorting things out by force”, Lavrov said.

The Russian state news agency RIA Novosti quoted a source in Haftar’s stronghold, Benghazi, as saying he did not sign because the agreement did not spell out a timeline for disbanding groups allied with Sarraj’s Government of National Accord (GNA).

Western powers are keen to stabilise Libya – home to Africa’s largest proven crude reserves – following years of turbulence since the death of Gaddafi.

Since the start of the offensive against Tripoli, more than 280 civilians and about 2,000 fighters have been killed and 146,000 Libyans displaced, according to the United Nations.

The Russian president, Vladimir Putin, and the Turkish president, Recep Tayyip Erdoğan, made a joint call for a ceasefire, which started at midnight on Sunday and was welcomed by the United Nations.

The leaders of Turkey and France on Monday called for a more permanent truce that would pave the way for a political process, while Germany was preparing a summit on Libya this month.

Putin late on Monday discussed the talks in Moscow with the German chancellor, Angela Merkel, the Kremlin said, following her visit to Moscow on Saturday.

Turkey and Russia’s diplomatic initiative came despite the countries being seen as supporting opposing sides.

Ankara dispatched troops – in a training capacity, it said – to support the GNA in January in a move criticised by European powers and the US president, Donald Trump.

The GNA has signed agreements with Ankara assigning Turkey rights over a vast area of the eastern Mediterranean, in a deal denounced by France, Greece, Egypt and Cyprus.

Russia has been accused of backing pro-Haftar forces, which are supported by the United Arab Emirates, Saudi Arabia and Egypt – all regional rivals of Turkey.

Several hundred Russian mercenaries are reported to be in Libya supporting Haftar. Putin said any Russians in the country were not in Moscow’s pay.