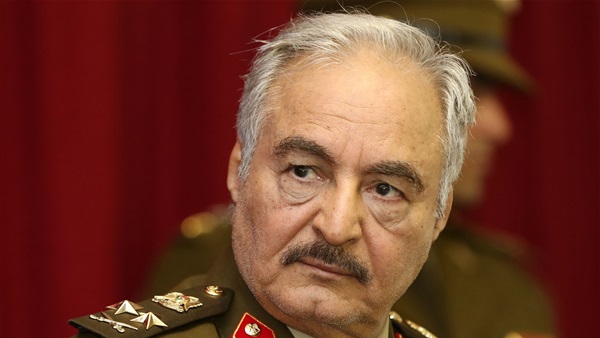 Libya’s eastern strongman General Khalifa Haftar has left Moscow with his delegation on January 14 without signing a ceasefire agreement to end nine months of fighting in the country.

Russia said it was hopeful the country’s warring rivals would soon conclude the deal to end nine months of fighting.

Turkey and Russia’s foreign and defense ministers acted as mediators.

Sarraj’s Government of National Accord (GNA) in Tripoli, which is an affiliate of the terrorist Muslim Brotherhood organization with the support of armed militias against the national army of Libya.

This opened speculation about the factors that may have prompted Haftar to delay the ceasefire, despite allegations raised about the imminent signing of a binding ceasefire agreement in Libya once the negotiations in Moscow ended.

On the other hand, Libyan sources told Al Arabiya that Haftar demanded the dismantling of militants groups and required the militias to hand over their arms, given that the existence of any militia would hinder any attempt for peace and security in Libya.

The sources pointed out that Haftar might be preferring to refuse signing any agreements that will not permanently end the crisis.

Discussions were also under way about establishing a Turkish observation mission in Libya to monitor the ceasefire, however, Haftar, according to sources, refused this as well as the fact that the agreement does not contain significant demands such as the withdrawal of Turkish troops from the country.

“We will pursue our efforts in this direction. For now a definitive result has not been achieved,” Lavrov said at a press conference in Colombo.

Libyan polititian Mohammed Al-Zubaidi told The Reference in an interview that Haftar’s position cannot be deemed a “delay”, but a refusal to the ceasefire agreement by Turkey and Russia.

Al-Zubaidi pointed out that Haftar did not delay signing the ceasefire agreement by Turkey and Russia, as that is considered a refusal to the whole deal.

He stressed that Haftar realized that if he signed the agreement, he will be forced to adhere to a road map that preserves the interests of Turkey and the terrorist militias in Libya, adding that Haftar’s wakefulness has foiled the Turkish scheme.

He also said Haftar was exposed to serious pressures by Russia to sign the agreement, which is more like a new road map for the future of Libya, pointing out that the situation might be developed into war.