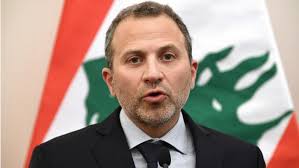 Lebanon’s Gebran Bassil was grilled on his government’s record by fellow panelists at the World Economic Forum in Davos on Thursday.

When asked by Gamble what had happened to Bassil’s plan to provide 24-hour electricity, Bassil said that the Lebanese system was hampered by immigration and confessionalism.

“Unfortunately … we have a malfunctioning system because of confessionalism,” he said, prompting Gamble to ask: “Don’t you think you’re supporting confessionalism?”

“When we came to the government … there was no electricity and no plan for electricity,” he said, but added that “We presented a plan … we are against the fiscal and monetary policy that was adopted in Lebanon, but we were not able to change it until now.”

The exchange was sometimes tense, with Bassil telling anchor Gamble “You did not get it!” at one point.

When asked if he thought that the Free Patriotic Movement (FPM), which Bassil leads, still has a mandate, Bassil replied “Of course … We are representing the people of Lebanon as of the last elections.”

Lebanese protesters continue to take to the streets to reject the current government, formed by Hassan Diab, and call for an end to corruption and for new elections.

Asked if this is a historic opportunity to diminish the influence of Hezbollah due to US Donald Trump’s “maximum pressure” sanctions campaign against Hezbollah’s patron Iran.

“You touched on a very sensitive issue, which is very important. It is our responsibility to fix this, but we do it internally and politically by our system … our system does not allow politically, whether its Hezbollah or any other party in Lebanon, to have the say in our politics. No one can withhold everything in the country, because of our consensual democracy,” he said.

Bassil’s FPM is allied with Hezbollah, with both parties forming two of the main pillars of the new government under Diab.

“When we use what’s happening in Lebanon for regional or international benefits … we deviate the energy from the protesters into division … the problem becomes the position of the United Sates,” he said.

“I’m not saying this [Hezbollah’s position in Lebanon] isn’t considered as a problem … but if you deviate what is happening now in the streets for an issue that is called Hezbollah, then the Lebanese will be divided on this issue, when they are united on fighting corruption.”

Bassil also denied that protesters had a united political cause, other than anti-corruption.

“They are protesting because they lost their money, they are losing their job opportunities, they are not united on any political issue … this is why we are with them,” he said.

On corruption and the failure of democratic systems, Bassil said that what was missing in the Middle East was a civil sate.

“We complain about corruption. Each one has to look at himself and say: ‘Am I corrupt?’“ said DAMAC Chairman Hussain Sajwani, who was also on the panel.

Bassil was also pressed on unemployment in the final question of the panel.

Bassil answered by saying he had increased rights for the Lebanese diaspora while foreign minister, adding that “they have to believe in the country again.” When pressed on whether he had failed, he said “that’s why the government resigned.”

“Let the people of the region decide what they want. Don’t dictate on them based on foreign recipes,” he insisted.

“This government should start right away to fix the fiscal problems of this country,” he finished.

Blue Brexit passports to be issued from next month

Democrats prepare to vote in most diverse 2020 state yet