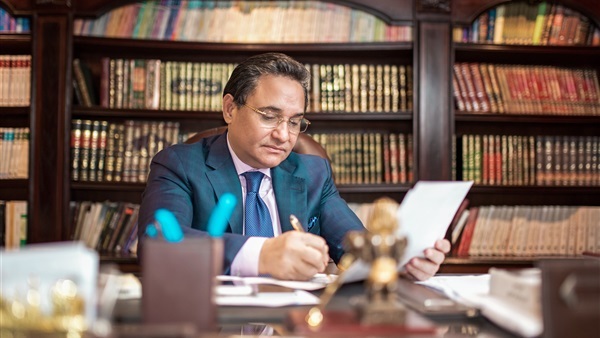 Egyptian soldiers who participated in the 1973 war against Israel chanted “God is Great”. They chanted this phrase as they went out to defeat one of the most powerful armies in the world then. They achieved victory.

God always stands by our side as we stand against aggressors and as we defend our land. War is always difficult, but Egyptians had never sought it. Egyptians had never been warmongers, but they cannot do without their dignity, even for a day. We are a nation that always proves itself at tough times.

The Egyptian nation has always been active and interactive. It wrote its history with sweat and blood.

Conscience was born here, lived here and will never die here. We have sworn an oath to keep this conscience alive so long as we are alive. We will never retract or recede. We will never be defeated or let our country down.

Egyptians always waged wars in defense of their land and honor. They had never been invaders in the past. They will never do this in the future.

In March 1839, the Ottoman army was at its most powerful. Ottoman Sultan Mahmud II took the chance of the revolution in Palestine against the Egyptian army’s recruitment system and ordered a quarter million soldiers and European mercenaries to march to discipline Egypt’s then-ruler Muhammad Ali Pasha and occupy Egypt.

As a result, then-commander of the Egyptian armies, Ibrahim Pasha, asked his father, Muhammad Ali, to allow him to cross the border to stop the Ottoman troops. Nonetheless, Muhammad Ali Pasha asked him to wait so that Egypt would not have pulled the trigger first.

The Ottoman army was deployed in Gaziantep, near the border with Syria. The war on Egypt was declared only in late May. This was when Muhammad Ali Pasha gave orders for Ibrahim Pasha to start his offensive.

Ibrahim Pasha gave his troops the orders to start marching and start the confrontation, after a long and exhausting journey.

The battle started on June 21. Ibrahim Pasha was wounded by shrapnel, causing him to fall on the ground. Soliman Pasha al-Faransawi and his brigade hurried to help and rescue this great commander from death. This caused Ibrahim Pasha to order his army to retreat.

The same event gave the Ottomans confidence that they would be victorious. They won the first round of fighting against the Egyptians anyway.

Nevertheless, the Egyptian army recuperated quickly. On July 24, Ibrahim Pasha gave his troops new orders to engage in a new round of fighting, but this time the Egyptian army crushed the Ottoman troops and was about to totally obliterate them. Around 200,000 Ottoman soldiers were killed and 12,000, including officers, taken hostage.

This gave the Egyptian army the chance to march toward Istanbul, the capital of the Ottoman state for the second time in less than six years. However, the Egyptian army did not do this, because its doctrine is not about aggression or occupation.

Can the fools of today learn a lesson from this history?