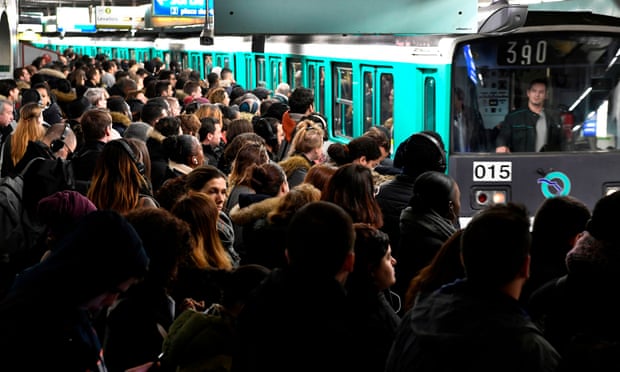 By morning rush-hour, there were more than 124 miles (200km) of traffic jams in the greater Paris area as public transport was badly disrupted, leaving millions of commuters struggling to get to work.

More than a third of teachers stopped work across the country and dozens of schools closed in the capital. Rail services across France were severely hit and there were warnings of potential delays and disruption to flights. Energy workers were also striking, with refinery stoppages. Thousands of police officers were poised for a protest march in the centre of Paris.

It is more than a week since Emmanuel Macron called for a “quick compromise” to end the biggest strikes of his presidency. The government hopes negotiations over the next 24 hours end the deadlock over changes to the pensions system. But to achieve this, officials must win over the moderate CFDT union, whose leader, Laurent Berger, said on Wednesday night: “We are far from a deal.” Talks will resume on Friday.

An Odoxa poll for Le Figaro found that 61% of the French public still feel the strike is justified but 57% want it to stop. Commuters in Paris and the surrounding banlieues, where millions depend on trains, have been particularly affected.

The protest movement against Macron’s flagship pensions overhaul has now lasted longer than any strike since the wildcat workers’ stoppages of May 1968. The rail stoppage, which began on 5 December, is now France’s longest continuous train strike since the creation of the national rail service in the 1930s.

The government says it will create a single, universal points-based pensions system for all, which will get rid of dozens of special systems for sectors ranging from rail and energy workers to lawyers and Paris opera staff. But there is a major sticking point over the government’s additional aim to tinker with France’s retirement age.

The prime minister has argued that to balance the pension budget, workers would be incentivised to stay in the labour force until 64 in order to take home full a pension, instead of leaving at the official retirement age of 62. Unions fear people will be made to work longer for lower pensions. Even moderate unions are angry at any change to the retirement age.

The dispute cuts to the heart of Macron’s presidential project and his pledge to deliver the biggest transformation of the French social model and welfare system since the postwar era. Since his election in 2017, he has leaned towards a Nordic style of “flexi-security”, in which the labour market is loosened and the focus is on changing from a rigid work code to a society of individuals moving between jobs.

Changing France’s pension system is the latest step for Macron after he overhauled labour rules and the unemployment system, but it has always been an extremely sensitive topic in France.