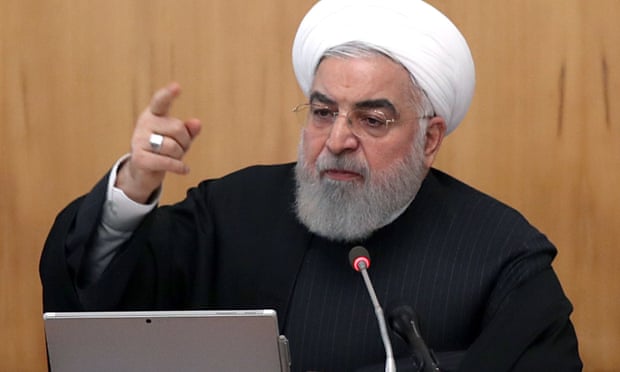 European troops may be at risk after dispute process triggered

Iran’s president has warned that European soldiers in the Middle East could be in danger after the UK, France and Germany triggered a dispute mechanism in a nuclear agreement that could lead to the reimposition of international sanctions on the country.

Hassan Rouhani’s remarks on Wednesday were the first direct threat he has made against European powers as tensions have grown between Tehran and Washington since Donald Trump unilaterally abandoned the nuclear deal more than 18 months ago.

“Today, the American soldier is in danger, tomorrow the European soldier could be in danger,” Rouhani said in a televised address to his cabinet.

He did not elaborate, though European soldiers are deployed alongside US troops in Iraq and Afghanistan. France maintains a naval base in Abu Dhabi and Britain has a base in Bahrain.

Europe has scrambled to find ways to rescue the 2015 agreement, which traded sanctions relief for curbs on Iran’s nuclear programme. Since US sanctions were reimposed, Tehran has gradually been increasing its nuclear activities in steps that it says are reversible.

On Tuesday, the three European parties to the deal triggered a formal dispute resolution mechanism citing Iran’s non-compliance with the deal, a process that could lead sanctions to be reimposed and the deal to be formally scrapped.

Speaking in Delhi on Wednesday, the Iranian foreign minister, Javad Zarif, struck a more upbeat note, arguing the dispute resolution mechanisms in the deal were intended to resolve issues such as these and that the agreement was “not dead”.

He heralded the agreement as “one of the best deals that has been made in the recent past, one of the few major achievements of multilateral diplomacy”.

The US pulled out of the nuclear deal in May 2018, arguing it did not comprehensively curb Iran’s misbehaviour including sponsorship of overseas proxies and its missile development. Tehran had been repeatedly certified to be in compliance with the agreement.

Zarif rejected Boris Johnson’s suggestion on Tuesday that Donald Trump negotiate a new agreement and brand it a “Trump deal”, arguing it would be difficult to trust the US to stand by the agreement. “If I have a Trump deal, how long will it last?” he said.

Rouhani said the prime minister’s suggestion was “strange”. “This Mr Prime Minister in London, I don’t know how he thinks. He says let’s put aside the nuclear deal and put the Trump plan in action,” he said.

“If you take the wrong step, it will be to your detriment. Pick the right path. The right path is to return to the nuclear deal.”

Separately, the British ambassador to Tehran announced he was returning to London for talks, a day after effigies of him were burned in the streets and judicial officials called for his expulsion for allegedly inciting and organising protests.

The Foreign Office said Rob Macaire’s visit to the UK “has been planned for quite a while” and he intended to return to Tehran.

Placards of Macaire were set alight in Tehran on Tuesday as a judiciary spokesman accused the diplomat of “interfering in [Iran’s] internal affairs” in breach of diplomatic conventions.

The envoy was arrested briefly near the site of a protest on Saturday against the downing of a passenger jet by the Iranian military. He was released but has been targeted by Iranian media outlets and officials.

“Under international law, such a person is a ‘persona non grata’. The people expect the person to be expelled and that is also what international law calls for,” an Iranian judiciary spokesman, Gholamhossein Esmaili, said on Tuesday, according to state media.

A Foreign Office spokesman said: “It is quite normal for our ambassadors to come back to London to have meetings here.”

Zarif told a security conference on Wednesday that his country “was lied to for a couple of days” about the cause of a last week’s plane crash, the first acknowledgment by an Iranian official that the public was knowingly deceived of the fact the aircraft carrying 176 passengers was shot down.

“In the last few nights, we’ve had people in the streets of Tehran demonstrating about the fact that they were lied to for a couple of days,” he said.

His comments point to possible rifts within Iran’s ruling establishment over the accidental shooting down of the plane a week ago and the subsequent days of claims by officials that it had crashed as a result of a technical malfunction.

The mistaken downing of the Boeing jet, as well as the government’s belated admission of guilt, has sparked resignations from state media outlets, rare public criticism of Iranian leaders and protests in Tehran and other cities.

Leaders from the Iranian Revolutionary Guard Corps, an elite, ideologically hardline branch of the Iranian military, have taken responsibility for the disaster, but characterised the delay in revealing its cause as a procedural matter.

After learning of the incident on Wednesday morning, commanders set up an investigation team that interviewed everyone involved, a process that took about 38 hours, the deputy chief of staff of the Iranian armed forces, Brig Gen Ali Abdollahi, said on Tuesday evening. “Naturally, the initial examination takes time,” he said, according to state media.

The Guards have jostled for power and influence with Rouhani’s elected government, which is an alliance of conservatives and reformists who have sought to open Iran to the outside world – a policy opposed by many hardliners.

A spokesman for Rouhani earlier this week said his government had been informed there was no missile involved in the crash and was informed of the truth only on Friday afternoon. He announced the following morning that the plane had been shot down in an “unforgivable error”.

Iranian state media announced on Tuesday that Iran’s supreme leader, Ayatollah Ali Khamenei, was due to deliver the sermon at this Friday’s prayers. Iran’s top cleric has not spoken at the prayer for eight years and is thought to only do so during critical periods. The last time he did so was in 2012 when he discussed the Arab spring and gave parts of his address in Arabic.