Latest Posts
22:27
Home Islamist Movements Erdogan turns to the White House after his failure in Libya 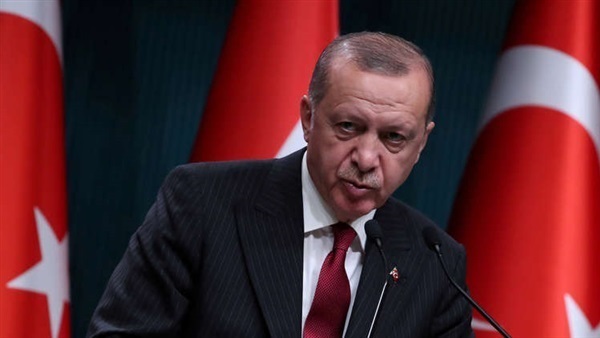 President Trump appeared in a press conference on Tuesday, January 7 and said that he discussed the developments in Libya with German Chancellor Angela Merkel and Turkish President Recep Tayyip Erdogan and will conduct similar discussions with Russian President Vladimir Putin, noting that he discussed with Erdogan “ways to restore peace to Libya.”

Since the end of the mandate of the US special envoy to Libya, Jonathan Winer, in early 2017, Washington has not sent a replacement. Observers consider this to be a decline in the priority of Libyan file at the White House, especially since Washington previously appeared interested in international and domestic files without crystallizing its own vision of the Libyan crisis.

Even with media reports circulating about the news of a hidden Russian presence alongside the army and that the Russian company Wagner Group sent its mercenaries to fight in southern Tripoli, the official American position did not bear any more concern about these reports. Trump’s call to Libyan National Army (LNA) commander Field Marshal Khalifa Haftar in April 2019 to give his blessing of the military’s efforts to combat terrorism and the meeting between a high-level American delegation and Haftar in November 2019 were not considered by observers to be more than diplomatic measures, indicating that Washington remained close to the Libyan crisis without specifying its position.

Turkey is now trying to overcome its impasse in the Libyan file by resorting to the United States after failing to impose its agendas on Haftar in Russia in an attempt to save the Government of National Accord (GNA), whose militias have been in retreat in recent weeks.

In this context, the White House and the Turkish presidency said that Erdogan discussed with Trump on Wednesday, January 15 the developments in Libya, just days before a summit is set to be held in Berlin to address the Libyan conflict.

German Chancellor Angela Merkel will host the leaders of Turkey, Russia, Britain and Italy next Sunday at the summit, which comes after a meeting in Moscow on Monday in which the warring parties in Libya failed to sign a ceasefire agreement.

The White House said in a statement that Trump and Erdogan also discussed the situation in Syria, the protests in Iran, and the downing of a Ukrainian passenger plane by Iran.

In an interview with CNN Turk on Wednesday evening, Cavusoglu demanded that Qatar participate in the talks alongside other Arab countries such as Egypt and the Emirates in an attempt to save an alliance that seems to have lost a new round on the Libyan ground.

Haftar withdrew from the Russian-sponsored talks after his insistence on the disbandment of the militias and terrorist groups supporting the GNA lef by Fayez al-Sarraj.

On Wednesday, Libyan Parliament Speaker Aguila Saleh and the Arab Parliament withdrew recognition from the GNA Presidential Council, saying that it violated the political agreement concluded in Skhirat, Morocco, which supports the Libyan people’s efforts in combating terrorism.

In a speech given to the Arab Parliament session that started on Wednesday in Cairo in the presence of Saudi Foreign Minister Prince Faisal bin Farhan Al Saud, Saleh stressed that “the parliament is the legal body in Libya” and that “any agreement signed without the approval of the House of Representatives is null and void.”

Haftar and the government of the parliament elected in 2014, which is based in the east of the country, do not recognize the legitimacy of the Tripoli-based Sarraj government that was formed by the Skhirat Agreement under the supervision of the United Nations in December 2015.

Saleh urged the Arab Parliament to consider the violations of the political agreement and the constitutional declaration by the Presidential Council as a violation of the sovereignty, unity, safety and security of neighboring countries, which necessitates withdrawing recognition of the GNA.

He also demanded that the Arab Parliament support “the right of the Libyans and their national army to fight terrorism and confront the Turkish invasion.”

Erdogan interfered in the Libyan file publicly and directly after he had been already supporting militias and the GNA militarily, as he announced in late November the signing of security and maritime border memoranda of understanding between Turkey and Sarraj’s GNA, which angered the countries in the region.

Ankara has taken agreement with Sarraj as an excuse to open the door for it to intervene in the Libyan crisis with the aim of establishing its military presence in North Africa and the Mediterranean region, where a race is underway to explore and exploit energy resources amid huge discoveries in recent years.