Latest Posts
13:44
Home Reports Erdogan pushes his Ottoman mercenaries to hell as they fall in Libya 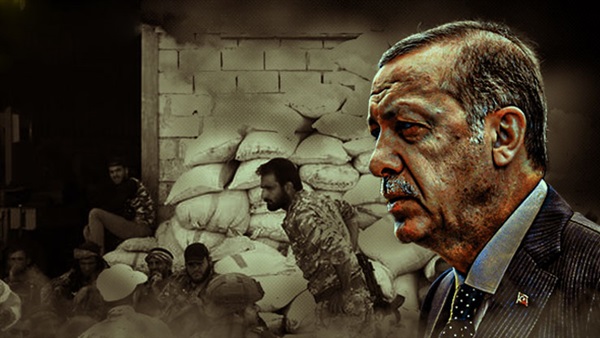 The mercenaries sent to Libya by Turkish President Recep Tayyip Erdogan, most of whom belong to Turkish-backed Syrian factions, have suffered several setbacks in recent days. A number of them have been killed as a result of military operations launched by the Libyan National Army (LNA) forces against the Tripoli-based Government of National Accord (GNA) militias. Most recently, three members of a pro-Turkish faction called the “National Army” were killed, bringing the number of mercenary deaths in Libya to 14. Ankara has also sent a new batch of mercenaries, estimated at 100 terrorists, to Libya, bringing the total number of mercenaries in the North African country to 1,700, according to a report by the Arab Organization for Human Rights in UK.

Erdogan’s mercenaries are carrying out a number of terrorist acts in Libya, including field executions of prisoners captured during these battles and targeting Libyan civilians with drones, which Turkey is using to support Fayez al-Sarraj’s GNA.

The Syrian Observatory for Human Rights said that three of the mercenaries that Erdogan sent to Libya were killed in battles between Sarraj’s militias and Field Marshal Khalifa Haftar’s LNA forces.

The observatory said in a statement on Tuesday, January 14 that the three dead mercenaries belonged to the pro-Turkish National Army militia, while previous mercenary deaths have come from the Mu’tasim Division, Sultan Murad Division, Suqour al-Sham Brigades and Hamza Division militias.

The Syrian Observatory pointed out that Ankara is working to settle the conditions of prisoners within the areas that Turkey had recently seized due to the Turkish invasion of northern Syria, including prisoners accused of having dealt in the past with the ISIS terrorist organization.

In March 2018, pro-Turkish factions in Afrin, under the full support of Ankara, committed many violations against civilians, including killings, kidnappings and imposing royalties to pressure those who remained, in order to complete Turkey’s plan in the region. These same practices have been resorted to in Libya by the Turkish-backed militias, who have carried out field executions of prisoners near Tripoli, according to the Syrian Observatory.

On the other hand, the New York-based Middle East Institute confirmed in a report that civilians in Libya are the only victims of the drone strikes being conducted by Turkey in support of the GNA led by Fayez al-Sarraj. The report pointed out that Ankara is fighting with other countries through the use of drones, as it oversees the operation of these aircraft and the selection of their targets, which are often aimed at Libyan civilians or refugees of other nationalities.

Investigating the crimes of Erdogan’s mercenaries

The Arab Organization for Human Rights in UK sent on Monday, January 13 a report to the International Human Rights Council, the High Commissioner for Human Rights and the United Nations Group of Experts on Libya calling for a fact-finding committee to be formed to investigate what atrocities Erdogan and his mercenaries have committed in Libya. The report pointed out that Erdogan’s recruitment of mercenaries from armed factions in Syria to fight in Libya is a clear violation of UN Security Council resolutions.

The organization said in its report that relying on extremist elements has become one of the back doors used for Turkish involvement in conflict areas. On January 8, about 260 mercenaries supported by Erdogan’s regime went to Libya to fight alongside the ranks of the GNA forces. Most of them came from a faction called the Sham Legion. The report added that this brings the number of mercenaries in Libya to about 1,000 armed men, while the number of recruits who have arrived in Turkish camps to receive training has reached about 1,700. This comes amid continued large recruitment operations carried out by Ankara.