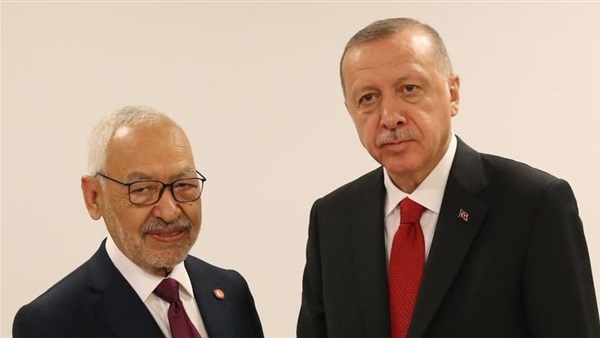 Tunisia was overwhelmed by great confusion last month with a surprise visit made by Turkish President Recep Tayyip Erdogan, whose visit to Tunisia was not planned.

Later, the Speaker of the Tunisian parliament, Rachid al-Ghannouchi, who is also the leader of Ennahda Movement, which is a branch of the Muslim Brotherhood, visited Turkey also without prior notice.

Ghannouchi’s visit to Turkey has triggered a wave of anger in the Tunisian street and the parliament as well.

A total of 122 Tunisian MPs have called for an investigation into the visit, calling for ousting Ghannouchi from his parliamentary office as speaker.

Ennahda-backed Habib Jemli was commissioned to form a new cabinet on Friday. However, Jemli’s new cabinet did not gain the parliament’s vote of confidence

It is noteworthy that Ghannouchi’s visit to Turkey was only one day following the parliament’s rejection of the Jemli-led cabinet.

Moreover, the Free Constitutional Party labeled Ghannouchi’s visit to Turkey as “treason”.  Abir Moussa, the party leader, told a press conference that Ghannouchi held a closed meeting with Erdogan, and that cannot be approved or accepted.

Riad Jarad, spokesperson for the General Union of Tunisian Students, said that Ghannouchi’s closed meeting with Erdogan proves attempts to save the Muslim Brotherhood organization in Tunisia and Libya, especially following the unraveling of the Turkish plots for Tunisia and Libya in collaboration with the Brotherhood.