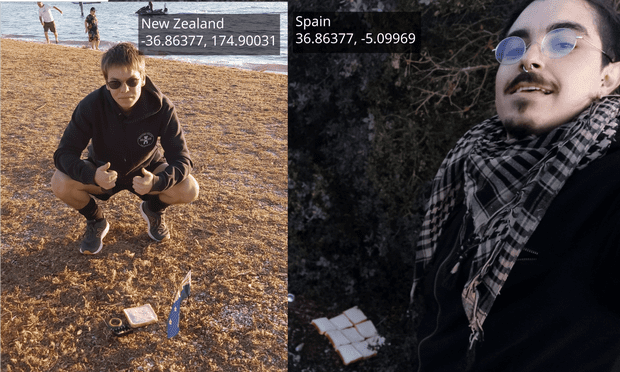 An Auckland university student has created an “earth sandwich” with a stranger in Spain, after a long search for an accomplice.

Etienne Naude, 19, placed a slice of white bread on the ground at Bucklands Beach in Auckland, using longitude and latitude to ensure he was precisely opposite a volunteer he had found in the south of Spain after posting for help on Reddit.

The two men – total strangers – had 12,724km of earth between them, creating an “earth sandwich”.

“It’s amazing that we’ve actually been able to collaborate and do something like this at exact opposite points of the globe,” Naude told RNZ.

“We made sure to get the exact location with Google Maps, to get us within a few metres range, and then we used the actual image data on Google Maps to pinpoint ourselves even closer than that.”

Naude said making an earth sandwich was a long-term goal of his, but he’d struggled to find someone on the other side of the world who was willing to lend a hand, and a slice of bread.

“It was quite hard to organise since it’s 12-hour time difference,” Naude said. “And there’s lots of things to arrange, such as the kind of bread, the time, the [precise] location.”

Naude first tried to find a willing participant in southern Spain using friend and family contacts, but when that failed he used Reddit instead.

A university computer science student, Naude only had to walk a couple of hundred metres to make his earth sandwich, while his Spanish counterpart travelled 11km.

“It’s quite tough to find a spot which isn’t water on the New Zealand end – and where public roads or paths intersect in both sides,” he said.