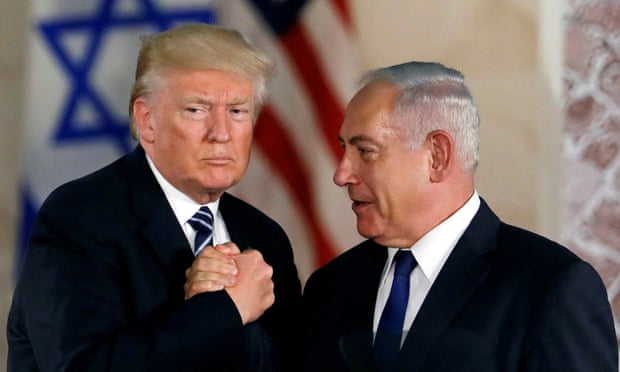 Donald Trump said he will probably release details of his long-delayed peace plan for the Middle East before next Tuesday, after he invited the Israeli prime minister, Benjamin Netanyahu, and the opposition head, Benny Gantz, to Washington for talks.

Speaking onboard Air Force One en route to Miami, the US president compared solving one of the world’s most intractable territorial disputes to a business deal.

“They say peace between Israel and the Palestinians is the toughest – the toughest of any deal.” He added he would “probably release” the plan a little prior to the Tuesday meeting.

Few political aspects of the proposal, which has been drafted by Trump’s son-in-law, Jared Kushner, have been released. Kushner proposed a $50bn economic plan for the Middle East in July to a cool regional reception. Palestinian leaders have preemptively rejected any peace initiatives as bias, and an attempt to bully them to relinquish long-held demands for a state and a resolution for Palestinian refugees.

Trump said he had spoken “briefly” to Palestinian leaders. “I’m sure they maybe will act negatively at first, but it’s actually very positive for them. But they have a lot of incentive to do it,” he said.

The Guardian understands that unlike previous attempts that have focused on getting Israeli and Palestinians leaders to find common ground, Washington’s new plan is drafted to be a prescriptive, take it or leave it, proposal.

Israeli media, citing unnamed Israeli officials, reported that the plan would be extremely favourable to the country, allowing it to take permanent control of much of the Palestinian territories, including Jewish settlements, and all of contested Jerusalem. The Palestinians may be granted some form of self-rule but under tight restrictions.

Those points, unconfirmed by the Guardian, would be in line with US foreign policy in the region under the Trump administration, which has promoted itself as the most pro-Israel in US history.

Washington reversed decades of its own policy by refraining from endorsing a two-state solution. It has also recognised Jerusalem as Israel’s capital, cut millions of dollars in aid to Palestinians, and announced that it no longer views Israeli settlements in occupied territory as “inconsistent with international law”.

A spokesman for the Palestinian president, Mahmoud Abbas, said in a statement that the development reaffirmed “our absolute rejection of what the US administration has done so far, particularly the recognition of Jerusalem as Israel’s capital”.

The US said it had tried to release the plan before but Israel has been engulfed in a political crisis after two inconclusive elections. They have left uncertainty over who will be in charge to negotiate such a deal. A third election is planned for 2 March and by inviting both leading candidates, Washington hopes to get Israel’s next leader onboard ahead of time.

Israeli political analysts interpreted the timing, however, as beneficial for Netanyahu, Trump’s rightwing ally, as it will distract from three ongoing corruption cases. Netanyahu argues that only he has the ability to get world leaders to agree to Israel’s demands.

The commentator Nahum Barnea, writing in the country’s top-selling Yedioth Ahronoth newspaper, said: “For better or for worse, the announcement of the deal – both its timing and its political ramifications – is a huge achievement for Netanyahu. Time will tell whether it is his lifeline or his swan song.”

Another piece in the same newspaper by Ben-Dror Yemini called on Israel to implement the agreement. It said: “Israeli governments in the past agreed to much less generous plans. So obviously we can and must agree to a plan that offers the Palestinians much less.”

Blue Brexit passports to be issued from next month

Democrats prepare to vote in most diverse 2020 state yet