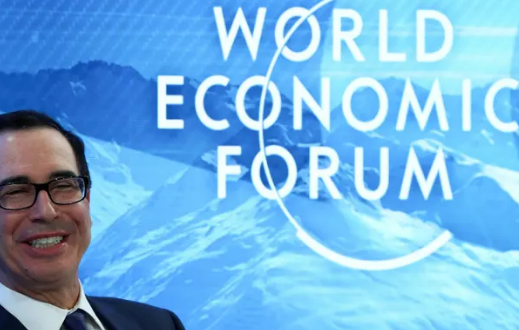 IMF chief Kristalina Georgieva cautions that the measures needed to tackle the climate emergency means that some industries will be less profitable in the future.

Christine Lagarde says the key to mobilising action is to remember the old advertising maxim:

There are three things that make people move — sex, fear and greed.

She’s not going to address the first (this is a family liveblog, Christine), but the other two can drive action.

Lagarde talks about need to price the cost of transitioning to a low carbon economy.

If we do that, and we have pressure — voluntary or no so -voluntary – we can get companies to move faster, she says.

Mnuchin, though, disputes whether green measures can really be priced — adding that a carbon tax is “a tax on hard-working people”.

The panel moves onto climate… and Steve Mnuchin says it is only one of several important issues.

He cites health (topical, given the coronavirus crisis) and the Middle East — Iran can’t be allowed to get a nuclear weapon, he insists.

Mnuchin says Donald Trump does care about clean air and water. He left the Paris Agreement because he felt it wasn’t fair.

There’s way too many people in the developing world who do not have access to electricity.

As much as we want to talk about the environmental issues …we need to work very hard to create an environment for these people where they have better lives.

It will be harder for the UK, though, Scholz warns — warning that the City of London will be less important after Brexit.

Speaking on today’s panel on the global economic outlook, Scholz warns that a country simply cannot have all the advantages of being a member of the EU while also enjoying the advantage of being outside as well.

I think we will find solutions, Scholz continues, but he adds that there might not be a “special, competitive advantage of being outside” the EU.

On trade, Steve Mnuchin says the UK will be at the top of the list for a free trade deal, after Brexit.

Asked about the United States’ trade deal plan this year, the Treasury Secretary:

We’ve already started the conversions with the EU. We look forward to making progress with them.

On the UK, the president has been clear going back to the election that the UK is our number one ally and will be at the top of the list of trade agreements.

We look forward to getting that done this year. We’re encouraged. We know they also have to get a deal with the EU.

ECB chief Christine Lagarde fears that Europe faces a Brexit “cliff edge” at the end of this year.

She tells Davos that there some positive signs surrounding the global economy – with employment very low, and trade tensions easing.

But the negotiations over Britain’s future relationship with the EU is a concern.

Lagarde says: Brexit is a little bit less uncertain, but we still have that possible cliff edge in December of 2020.

We don’t’ know exactly what the trade relationship will be.

And it’s a big partner for the euro area, so that’s certainly a question mark.

Earlier this week, UK chancellor Sajid Javid told the World Economic Forum that a comprehensive deal can be reached by December.

But it’s going to be tough. Yesterday, Dutch prime minister Mark Rutte told Sky News it was a 50:50 chance.

US Treasury secretary Steven Mnuchin, who took that nasty potshot at Thunberg yesterday, has told Davos that US government spending needs to be reined in.

We look at a very robust economic outcome through 2020, Mnuchin predicted.

Mnuchin adds that “fiscal policy has worked”, and predicts that Donald Trump’s tax cuts will pay for themselves over 10 years (some economists disagree about this, but we’ll see).

But looking ahead, Mnuchin says “we need to slow down the rate of growth of government spending, and lower it as a ratio basis.”

That might worry Americans who depend on welfare, for example.

There is no point waiting for the crisis to come up before acting – the crisis is here now.

Neubauer reiterates that she met with Siemens CEO Joe Kaiser at Davos this week, to pressure him to ditch the Adani coalmine contract (to provide rail signalling technology).

We had a very good discussion here at Davos, so the dialogue is still going on.

She then urges all investors, and all companies responsible for making fossil fuel projects, to heed the crisis.

Our message to Joe Kaiser, and other business leaders, is that if you add up all the contracts that have been signed today on fossil fuel projects, we will be far beyond keeping temperature rises below two degrees C, she says.

Neubauer says: Some, or all, of those projects need to be cancelled if we are to achieve the Paris Agreement goals.

That is not an impossible demand that is a rational demand.