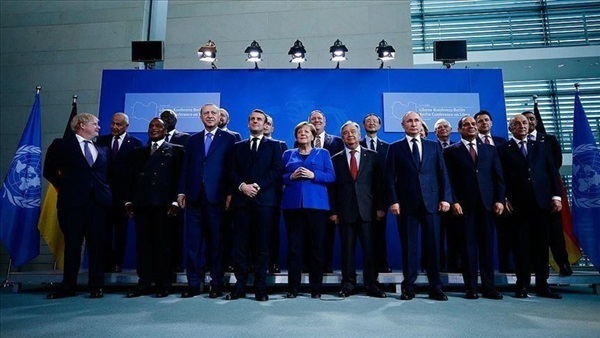 Berlin conference: Between Libyan crisis and fears of return of ISIS

The German capital Berlin hosted a conference on the Libyan crisis, with the participation of Egypt, the Emirates, Algeria, Congo, Russia, France and the United States of America, in addition to Turkey, Italy, Britain, China and Germany, where the conference aimed to put a solution to the ongoing fighting in Libya for months.

It also aimed to reach a peace agreement that prevents Tripoli from turning into a war zone but what if the conference did not come out with a solution to the crisis, and its consequences on the territories and its dangers for the terrorist organizations?

In the event that the Al-Wefaq government led by Fayez al-Sarraj insisted that the militias do not surrender their weapons and this would hinder the agreement with the leader of the Libyan National Army, Field Marshal Khalifa Haftar, and the situation in the country will remain a crisis, allowing external interventions that would turn Tripoli into a “new Syria.”

The lack of agreement between the government of Al-Sarraj and Field Marshal Khalifa Hifter enables Turkish President Recep Tayyip Erdogan to exist on Libyan soil and implement his policies and purposes, especially as he tried to blackmail the European Union in an article published by the American “Politico” magazine, with the emergence of terrorist organizations such as “ISIS and Al Qaeda” in the old continent, if “reconciliation” failed.

The Turkish president announced it outright that in the event that Al-Wefaq fell, “ISIS and Al Qaeda” will find a fertile ground to stand again on their feet after the military defeats they suffered in Syria and Iraq, confirming the intention of “Erdogan” in the event that the European Union does not agree to his presence in Libya, to turn Tripoli to a new headquarters for terrorist organizations.

According to intelligence reports, Erdogan has good relations with ISIS, providing him with 3 training camps on Turkish soil, and the Turkish president facilitated their crossing into Syria and Iraq across his borders, in addition to his links to the “Jabhat al-Nusra” in Idlib, Syria.

This step would be a fresh blood pumping into the veins of ISIS, who is looking for a new foothold for it, especially after losing its strongholds in Syria and Iraq, and its continuous search for a new headquarters in fertile land, enabling it to raise its flag again.

For his part, Emmanuel Macron, the French president, said that he was very concerned about the arrival of Syrian and foreign forces in Tripoli in Libya, calling for an end to this immediately and noting in his speech at the Berlin conference, that “the United Nations should negotiate truce terms in Libya without imposing either side.

The French President’s statements refer to the “Syrian mercenaries” whom Turkey transferred to Libyan territory to support the Al-Wefaq government, according to several reports and videos, and foreign forces refer to “ISIS” elements and other terrorist organizations in Tripoli supported by Turkey and receive funds from Qatar.

In turn, the Syrian Observatory for Human Rights, on December 26, 2019, revealed the opening of 4 centers to attract fighters within the headquarters of the armed groups that Ankara supports in Syria, to encourage young people to join the war in Tripoli by offering them financial temptations.