Latest Posts
16:44
Home Islamist Movements Behavior, not regime: International will to change in light of calls to overthrow mullahs’ regime 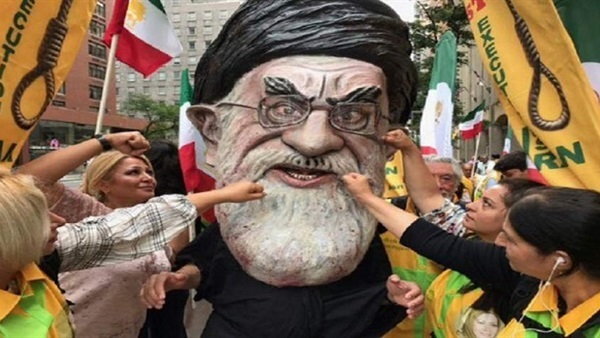 Behavior, not regime: International will to change in light of calls to overthrow mullahs’ regime

The past few days have demonstrated the fragility of the mullahs’ regime and all its apparatus, and this was evident after the United States managed on January 3, 2020 to kill Qasim Soleimani, the second man after the guide, which increased the state of discontent among the masses of the Iranian people who went out in demonstrations on January 11, 2020 demanding the removal of Supreme Leader Ali Khamenei.

The Iranian reformist opponent Mahdi Karoubi in a statement posted on the Iranian “Saham News” on January 11, sent a message to the guide asking him to step down and leave his post.

Karoubi said that the guide does not possess the qualities of leadership and must step down, especially after denial regarding an accident. The Ukrainian plane, which was hit by an Iranian missile, asked the guide about why he had not said anything about this incident and his denial, and about his presence at the time as commander in chief of the armed forces.

n his letter, the Iranian opposition pointed out that this is not the only scandal in which the Supreme Leader bears direct responsibility, and demanded that he opens investigations into serial assassinations that took place in the 1990s, the 2009 election fraud and the bloody crackdown of protesters at the time, as well as the suppression of the 2018 and 2019 protests.

The 82-year-old Iranian cleric Mehdi Karoubi is known for his strong opposition to the Iranian regime, which prompted the regime to place him under house arrest in the Jamaran region, north of Tehran, from 2011 until now, and allowed him to communicate with members of his family, and because Karoubi is forbidden to communicate with others and the appearance of the media, so his son, “Hussein Karoubi”, was the one who conveyed his messages, opinions and stances in the events that happen from time to time.

Karoubi was an adviser to the Iranian leader, Khamenei, and a member of the Expediency Council, but he resigned from all these government positions, as a result of his rejection of the result of the 2005 presidential election, which was won by “Mahmoud Ahmadinejad,” and then the most prominent Iranian opposition went to form a party known as “Etemad Melli” issued an electronic newspaper called “Saham News”.

Some conservatives demanded his execution as a factor of strife in the country, if “Karoubi” had previously criticized the guide, and demanded that he institutes pivotal reforms in the method of government in which no change took place three decades ago, according to him.

In the context of this, questions are raised about the guide’s fate. Is the message of the opposition “Karoubi” a friend within the Iranian society and the leader’s resignation and a fundamental change in the government, or that the regime will not allow this to happen and will, as usual, suppress all the opposing voices?

The mullahs have changes within the corridors of government during the coming period, especially in light of the internal and external crises that are constantly suffering from them.

The nature of the regime

To answer these questions, Firas Elias, a researcher specializing in Iranian affairs, explains in a special statement to the Reference that the reformist opposition’s message came to add more pressure to the political system in Iran, which is suffering from internal disintegration, in addition to losing a large percentage of its political legitimacy inputs.

Elias pointed out that the chronic crisis state in which the Iranian regime is living seems to exceed the regime’s ability to absorb it or even deal with it, and it seems that the main reason for this is the rigid nature of the Iranian regime, which seems to be unable today to provide new convincing the uprising citizen.

The researcher pointed out that the matter regarding the possibility of Khamenei stepping down or resigning seems a little difficult, if this is not the first time that he has been asked to resign or even question his legal mandate, and on this basis it can be said that the call will not receive wide resonance for many reasons, the most important of which is that the battle today has become a battle of existence between a political system that strives to survive with all its institutions and bases, and between internal and external opposition that cannot go far in the adventure of fighting this system, especially since we are talking about a system that has political traditions in how to quell the demonstrations and turn them into a victory that serves the system and its regional project.

Elias added that talking about changes that the political system in Iran could bring about could be one of its options, for several reasons, including neutralizing the American position calling for changing its regional behavior, along with reassuring Europeans that the system still has the ability to solve, or to convert from part of a problem to part of the solution.