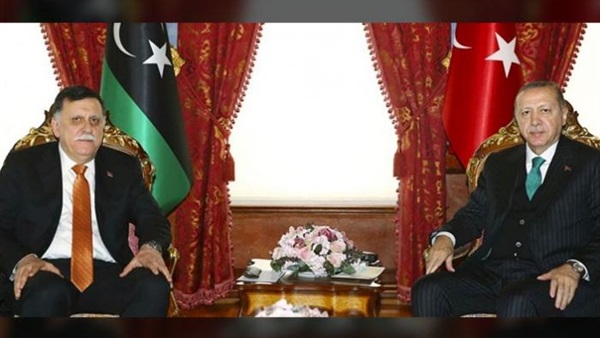 An ignorant friend and a foolish enemy: Al-Sarraj implicates Erdogan with disastrous confessions about Libya

Statements by Fayez al-Sarraj, head of the Libyan Accord government, to BBC, sparked widespread controversy in Libya, when he admitted that there were Syrian mercenaries fighting in the ranks of his militias against the national army, and stressed that he would not hesitate to ask any party to help defeat what he called “aggression” against Tripoli.

The Libyan crisis is exacerbated in light of the intransigence of the Saraj government, which rejects all solutions aimed at ending the ongoing war in Libya, and the UN Security Council called on the parties to the conflict in Libya to reach the earliest possible ceasefire.

Al-Sarraj and Field Marshal Khalifa Haftar, commander of the Libyan National Army, agreed to participate in the Berlin conference, under the auspices of the United Nations, but they refused to meet face-to-face, in a reflection of the large chasm still existing between the two camps.

“The members of the Security Council urge the Libyan parties to participate constructively in the military committee named 5 + 5 in order to conclude a ceasefire agreement as soon as possible,” the council said in a statement issued at the end of a meeting on the outcome of the Berlin Summit held on Sunday on Libya.

“The members of the Security Council urge the Libyan parties to participate constructively in the military committee named 5 + 5 in order to conclude a ceasefire agreement as soon as possible,” the council said in a statement issued at the end of a meeting on the outcome of the Berlin Summit held on Sunday on Libya.

Oil is in crisis

In a parallel context, tribal leaders in eastern and southern Libya announced their continued closure of oil production and export fields and ports, the last of which was the huge “Sharara” field in the south of the country which produces about 300,000 barrels per day, bringing the Libyan crude export rate close to zero, despite international calls that the number and output of the International Meeting for Libya in Berlin multiplied and spared the first resource of the country’s economy, the repercussions of the political and military conflicts that the country in North Africa has been experiencing for years.

“Libya will face a catastrophic situation if external forces do not pressure the Libyan army commander, Field Marshal Khalifa Haftar, to stop the siege of the oil fields that led to the cessation of crude production almost,” he said.

“He rejected Haftar’s demands to link the reopening of ports to the redistribution of oil revenues to the Libyans,” he told Reuters, stressing that he would “respect the Berlin Summit’s call for a ceasefire and political talks, but he would not sit again with Haftar.”

Statement of the Libyan tribes

The Libyan tribes in the areas where the oil fields are located and concentrated in the east and south of the country have set several conditions for reproduction.

A statement to the elders and notables of the tribes confirmed that “the ports and oil fields can not be reopened until after the Libyan people’s demands are fulfilled.

For his part, the Guard of Oil Facilities Guard issued a statement to respond to the statements made by Sunnallah which came in his speech to Parliament Speaker Aqila Saleh.

The agency stressed that “Sunnallah ignored and forgot the efforts of the armed forces and the Guard of the Oil Establishments to liberate oil fields and ports and deliver these ports to the Corporation in front of the whole world, after they were protected and secured to preserve the livelihood of the Libyans.

It also noted that stopping the export of oil came based on a decision halting the export according to the statement of the Libyan Tribes and Cities Forum, issued at the oil port of Zouitina, which is a matter for the Libyan people, as described