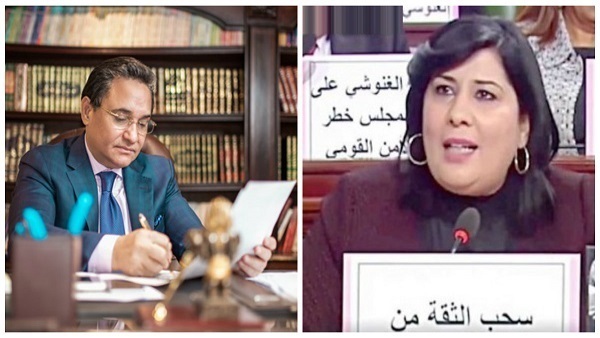 Member of the Egyptian parliament and chief of the Center for Middle East Studies in Paris (CEMO), Dr. Abdel Rahim Ali announces his solidarity with the Tunisian MP Abir Moussi against the Brotherhood Member Rashid Ghannouchi.

Ali announced his solidarity with Moussi, head of the parliamentary bloc of the Free Destourian Part (PDL), calling for an urgent investigation with the leader of the Tunisian Brotherhood Rashid Ghannouchi, after it was assaulted and her party’s representatives inside the Tunisian Parliament.

Ali said in a statement issued today that He backs the Tunisian MP after the House of Representatives has been violated.

Ali pointed out that the Speaker Al Ghannouchi responsible for the assault.

Abir Moussi announced that she had tabled a petition requesting the withdrawal of confidence in the Speaker of Parliament.

Moussi said that she is victim of an assault by people who were able to reach the Parliament with the aid of deputies Seifeddine Makhlouf and Rached Khiari.

“They attempted to attack me because of my stand on the file of martyrs of the revolution,” she revealed.

Ali called for Public Prosecution to open an urgent investigation after the attack.

Abdel Rahim said that what Abir Moussi was exposed is a crime and a political assassination, this attack is a violation of the movement of Parliament and the Tunisian sovereignty.

Ali praises Moussi after her great success in exposing the Muslim Brotherhood Speaker Rashid Ghannouchi after his secret visit to Turkey and his meeting with the Ottoman dictator Recep Tayyip Erdogan.

Ali said that the Tunisian M P deserves honor, support because she revealed Ghannouchi when she told him “It is not your right, after learning about state secrets and the workings of the state, to divulge its secrets to foreign entities,” Moussa said, addressing the speaker of the parliament”.

Moussi stated that her life and PDL MPs are in danger, assuring that she will continue her battle for the freedom of Tunisia.

She also called for an extraordinary plenary session to hear the interior and foreign ministers on the visit and to clarify the parliament’s position on the Libyan question.

She said in tears that she is threatened with assassination, indicating that Tunisia is in danger.