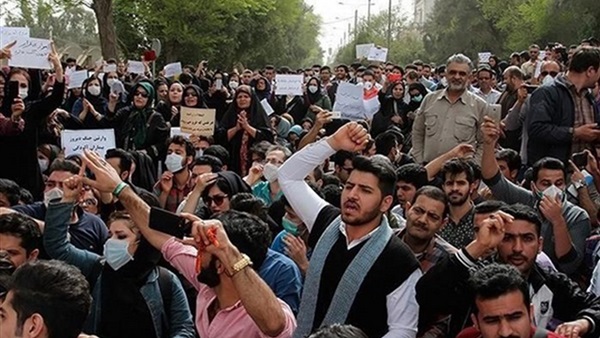 The massacre committed by the terrorist Iranian Revolutionary Guards in the Ahvazi city of Mahshahr, which saw dozens of Ahvazi youth shot dead and hundreds of revolutionaries arrested within only three days since the start of the uprising that hit most cities in Iran in late November 2019, was not in reaction to armed groups linked to Iran’s enemies, as was claimed by Iranian officials.

The incident has far-reaching and dangerous implications when gauged against the principles of the International Covenant on Civil and Political Rights, especially those that obligate the signatory countries to enforce “economic, social and cultural rights.” The covenant was issued by a UN General Assembly resolution in December 1966 and was signed by Iran on April 4, 1968.

To confirm the matter, it is not satisfactory to refer only to the claims of the people of Ahvaz, who are targeted by these racist and chauvinistic Iranian policies that directly and fervently threaten their existence. Rather, the issue has surpassed the Ahvazis’ voices years ago, reaching the corridors of the United Nations and its secretary-general.

The first important international report confirming Iran’s aggressive and dangerous policies targeting the Ahvazis was put together by a group of independent international scholars working in UN-affiliated NGOs in March 2005. The report confirmed, using physical evidence and solid documents, that the Iranian authorities committed severe crimes amounting to ethnic cleansing against the Ahvazi Arab people.

The most important points mentioned in the report:

– The Arab region of Ahvaz has an Arab majority whose population exceeds 4.5 million people who consider themselves non-Iranian. The Iranian state annexed the territory in 1925.

– Ahvaz makes up more than 80% of the Iranian income generated from extracting oil and gas.

– Iran considers Ahvaz a military zone, deals with the people on a security basis, and judges any Ahvazi human rights demands as a threat to Iranian national security.

– Iran is constantly intensifying its military presence in Ahvaz and making it a vast military and security barracks.

– The Iranian authorities do not allow any researchers or international media to visit Ahvaz.

– The Iranian authorities deal with Ahvazi youth as a potential threat and the source of violence and crime in the area.

– Ahvazis demand that they be able to exercise their right to self-determination as one of the principle rights that fall within the International Covenant on Economic, Social and Cultural Rights signed by Iran.

This important report prompted UN institutions to insist on sending a UN special rapporteur to investigate the truth. Following the international insistence at the time, and for many humanitarian and human rights reasons, the United Nations forced Iran to accept its decision to visit the country, including the region of Ahvaz.

The UN special rapporteur on adequate affairs with the Human Rights Council, Miloon Kothari, traveled at the end of July 2005 to different regions in Iran, including Ahvaz, and then returned with a very important report on the Ahvaz issue and its history, which he presented to the council at the end of November of the same year.

In his report, Kothari stressed the validity of many of the points found in the previous report that had been submitted to the secretary-general in March 2005.

Among the most important points emphasized in Kothari’s report:

– About 1.2 million Arab citizens from the Ahvaz region have been deported to other regions in Iran, while 1.5 million non-Arabs have been brought in.

– The Iranian authorities are building many large settlements and only settling those coming from Iran’s central provinces. Among these are the Ramin 1, 2 and 3 settlements and the Shirin Shahr settlement built on confiscated Arab lands, along with a number of other housing settlements in pockets within Arab cities such as the capital Ahvaz, Khorramshahr, Abadan, Susangerd, Bandar Mahshahr, Omidiyeh, and the Shoaybiyeh area, which the Lurs have inhabited for 20,000 years.

– The construction of these settlements on Arab lands was based on directives that had been issued from the highest levels of the Iranian government. During the past ten years, more than 220,000 hectares of fertile agricultural land were confiscated from Arab farmers for the benefit of new settlers who came from other regions in Iran so as to change the demographics.

– The Iranian authorities systematically pursue a policy of creating a mixed demographic in Ahvaz in order to erase the Arab identity of the land and people in Ahvaz and to strip them of their national and cultural identity, as well as to eliminate the Arabic language and culture.

– As part of the policy of Persianization, the Iranian authorities compel the Arab population to learn the Farsi language, without allowing them to teach the Arabic language. According to official Iranian government data, this lead to 30% of Arab students in the elementary stage escaping, while that rate was 50% in the preparatory stage and 70% in the secondary stage. Also, 80% of Arab children suffer from malnutrition.

Speaking in a 2005 interview with IRIN about his report, Kothari said that “when you visit Ahvaz in terms of the very adverse conditions in the neighborhoods, there are thousands of people living with open sewers, no sanitation, no regular access to water, electricity and no gas connections.”

“The third issue in Khuzestan, which is very disturbing, is that there is an attempt being made by the government to build new towns and bring in new people from other provinces. For example, there is the new town of Shirinshah where most of the people being brought into that town are people from Yazd province [in central Iran] – non-Arabs,” he added.

Kothari further confirmed during the interview that “the estimate we received is that 200,000-250,000 Arab people are being displaced from their villages because of these projects. And the question that comes up in my mind is why is it that these projects are placed directly on the lands that have been homes for these people for generations?”

After reviewing these international reports and evidence, there is no reason to doubt that the Iranian authorities intend to isolate the Arab regions in south and southwestern Iran and to deal with them with excessive hostility, as Tehran considers it to be occupied land and the Ahvazi people to be hostile, accusing them of destabilizing national security. Iran therefore views it as permissible to shed their blood and forfeit all their rights.

Likewise, the successive Iranian policies adopted in the Ahvaz region do not carry any human development projects or have the slightest degree of justice or fairness, and they do not adhere to any principle of international law or any international pact, even those covenants that Iran has signed and is therefore obligated to implement.

Therefore, there is no doubt that Iran is pursuing policies of genocide and ethnic cleansing against the Ahvazi Arabs, which are considered crimes against humanity. This calls for urgent international action to stop these Iranian policies against humanity and to protect the defenseless Arab people of Ahvaz.