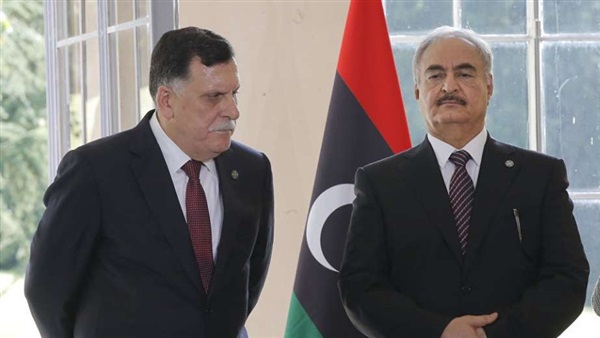 In a new step, the Libyan National Army commander, Khalifa Hifter, decided to postpone the signing of the ceasefire agreement, leaving and his delegation, Tuesday, January 14, 2020, Russia, which hosted international talks in cooperation with the Prime Minister of the Government of Agreement Fayez al-Sarraj and the Turkish side.

This opened speculation about the factors that may have prompted him to take this position, despite allegations raised about the imminent signing of a binding ceasefire agreement in Libya once the negotiations in Moscow ended.

On the other hand, Al-Arabiya Network quoted – according to Libyan sources, whose name was not mentioned – that the Libyan leader Haftar stipulated that armed militias be disbanded and handed over to the weapons in their possession, because they (i.e. the militias) prevent the imposition of peace and stability in the Libyan territories, and there is no point in concluding any agreement.

While some other sources went – according to Al Arabiya Network – for a second hypothesis that Commander Hifter refused Turkey’s assumption of the task of supervising the ceasefire in the country, as well as the agreement being clear of important demands of the Libyan state, including the withdrawal of Turkish forces from the country, and preventing Al-Sarraj from signing any agreements without returning to the national army.

For its part, Russia commented on the developments of the situation, saying through the Ministry of Foreign Affairs that the country will continue efforts with the parties concerned in Libya until an agreement is reached that satisfies all parties.

Libyan politician, Muhammad al-Zubaidi, refuses to call the postponement of the position of Field Marshal Khalifa Hifter, confirming that the latter rejected the document issued under the auspices of Russia and Turkey in general and did not ask to give him a deadline as reported by the media outlets affiliated with the Brotherhood.

He denied that the dispute over the document should be in one or two items, pointing out that there was a conspiracy held under the auspices of Turkey, the content of which was that the government of conciliation reached Moscow and signed a document prepared from a Turkish point of view, so that Field Marshal Hifter gets embarrassed and had to sign.

He pointed out that Haftar found that with his signature he will be bound by a road map that preserves Turkish interests and the survival of terrorist militias.

He added that Marshal was under intense pressure by Russia to agree to the document, considering that it was not a document to agree to a ceasefire, but rather a new agreement or a map of Libya in the near future.

He ruled out that the Marshal would agree to the document under any circumstances, even if Russia made an amendment to one or two provisions, stressing that the situation in Libya will remain as it is until the military confrontations are repeated again.

He stressed that the Libyan army is determined to resolve the battles, pointing out that the scene will go back to war and there is no room for a political solution.

He concluded that until the upcoming Berlin conference on Sunday, January 19, 2020, it would not be useful to add any changes to the scene, considering that everything that happens is only a waste of time.