Latest Posts
18:25
Home Reports Thirty years on, will the guilty pay for horror of Ceaușescu orphanages? 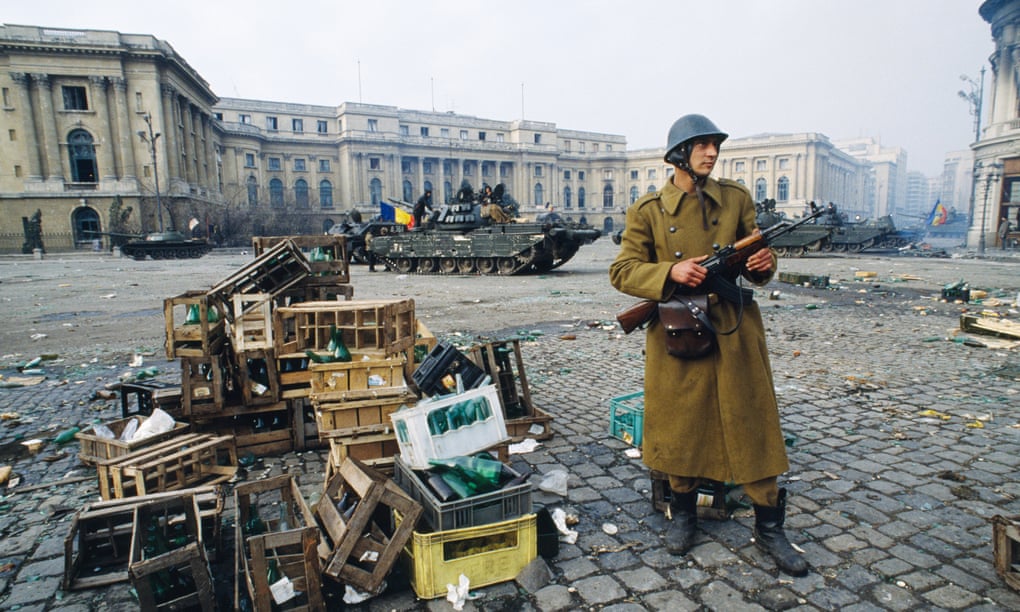 Thirty years on, will the guilty pay for horror of Ceaușescu orphanages?

They were the pictures that, for many across the world, were the defining image of the aftermath of Romania’s 1989 revolution: emaciated children clothed in rags, looking into the camera with desperate eyes amid the squalid decay of the country’s orphanages.

Christmas Day will mark 30 years since Nicolae Ceaușescu, Romania’s megalomaniac, isolationist dictator, was convicted in an impromptu trial and shot dead together with his wife. His execution ended more than two decades of rule that brought poverty and misery to the majority of the country’s population.

In the three decades since his fall, only a handful of people have faced legal punishment for their roles in Ceaușescu’s repressive regime, and there have been no criminal cases over the tens of thousands of children mistreated by the regime’s inhumane network of juvenile internment institutions. Soon, however, that could change.

Prosecutors are investigating dozens of people with direct or indirect responsibility for deaths in the system, after a long inquiry by investigators from the Institute for the Investigation of Communist Crimes, a state body tasked with looking into abuses from the communist period. Florin Soare, an investigator for the institute who spent several years gathering testimony, estimates that between 1966 and 1989 there were between 15,000 and 20,000 unnecessary deaths of children in Romania’s grim network of children’s homes, with the vast majority taking place in those set aside for disabled children.

“When we started investigating, we knew there were abuses, but we never imagined the extent of the crimes that were committed,” he said in an interview at the institute’s modest headquarters in central Bucharest. The investigators handed over the results of their work to Romanian prosecutors in 2017. The prosecution service told the Observer they are continuing to gather evidence “due to the large number of cases”. Official charges could be filed next year.

The process of bringing the crimes of the communist period to light is moving slowly. The repression is skimmed over in school classes, said Ana Blandiana, a poet who has transformed a former communist-era prison in the town of Sighet, on Romania’s border with Ukraine, into the country’s only museum of communist crimes.

Few among Ceaușescu’s inner circle were tried in the aftermath of the revolution, and attempts to bring prosecutions for specific crimes have ended in failure in all but a handful of cases. The trial of Ion Iliescu, who took over from Ceaușescu and is now 89, finally began in Bucharest last month after years of delay. He is accused of crimes against humanity for his role in the violence that continued after Ceaușescu fled. In October, a Bucharest court acquitted two former officers of the communist-era secret police, the Securitate, of crimes against humanity over the death of dissident Gheorghe Ursu, who died in detention in 1985 after being tortured by his jailers.

“The point is not to put 90-year-olds in prison, the point is to change the atmosphere of the country, to speak the truth about the period and to tell the truth in order to close this chapter,” said Blandiana.

Bucharest has no museum of communism, and the city’s history museum ends its displays in 1918, with visitors enquiring where the 20th-century section is given an irritated shake of the head by the attendants.

Orphanages are a particularly sensitive point, with many Romanians feeling that the wide publicity for the footage, and subsequent massive global adoption campaign, is a stain on the country’s reputation that is best forgotten.

The country’s orphanages began to fill up from the late 1960s, when the state decided to battle a demographic crisis by banning abortion and removing contraception from sale. Many of those in the orphanages were not actually orphans, but those whose parents felt they could not cope financially with raising a child.

The most horrific abuse took place in homes for disabled children, who were taken away from their families and institutionalised. At the age of three, disabled children would be sorted by hospital commissions into three categories: so-called “curable”, “partially curable” and “incurable”. The children who were sorted into the third category, some of whom had minor or no disabilities, were subjected to particularly brutal conditions.

Across the country, there were 26 institutions catering to the “category three” disabled children. Investigators from the institute picked three of them to investigate, and found shocking mortality levels among the children. “They didn’t die from the disabilities they had: 70% of the registered deaths were for pneumonia. They were dying of external causes that were preventable and treatable,” said Soare.

As the investigators continued, they discovered ever more horrific details. There is testimony of children suffering from frostbite, and of children literally being eaten by rats, being kept in cages or being smeared in their own faeces, said Soare.

The investigators logged 771 deaths they believed could have been prevented in the three facilities in the late 1980s, suggesting that the number across all 26 institutions over a longer period is much higher. “There is no document that proves this, but it is clear that the ultimate goal of this was an extermination campaign,” said Soare. The list of those the institute believes should be prosecuted for the deaths is classified, but includes employees directly responsible for abuse, and functionaries in the communist system.

Some of those who spent their childhoods in the facilities have mixed feelings about whether court cases are a good idea, three decades later. Florin Catanescu, a 41-year-old who was taken from his mother at birth because she was receiving psychiatric treatment at the time, grew up in a series of orphanages.

He remembers cases of ill treatment, but believes in focusing on the future, not the past. “It’s better to concentrate on positivity moving forward, and to make sure these things can’t happen again,” he said. He now runs a halfway house in the city of Braşov, providing accommodation for today’s orphanage leavers and helping them to integrate into society.

For him, life is about making up for the time stolen from him by the cruel internment system. “I don’t have any real memories. It’s like I didn’t have a childhood, so being free now, I am trying to do all the things I would have liked to do as a child.”

Izidor Ruckel, who spent his first 11 years in one of the facilities for supposedly “incurable” children, because he had contracted polio as an infant, was adopted by an American family and left Romania in 1991. He now lives in Denver, Colorado.

There were a number of genuine sadists on the staff of his institution, he recalled, including one woman who “you could feel in her veins that she loved abusing kids” and was so aggressive that she sometimes had to be restrained by other staff. Ruckel recalled being subjected to gruesome beatings and other forms of abuse, as well as frequently witnessing other children being given forced sedations, violent beatings or being tied to the beds. “There were children who were beaten, and the next day they were dead,” he said.

However, asked whether he wants to see specific employees who may still be alive brought to trial, Ruckel was hesitant, saying it was for God alone to judge, and it would be better “to let it go” after so much time has passed.

He said many of the staff were simply broken by the inhumane nature of the system. “I don’t blame them. A lot of them were not educated to work with disabled children and it was impossible for so few people to manage so many children. A lot of them had sympathy but would be punished by the meaner, older workers if they tried to help too much.”

In 2016, Ruckel returned to Romania to make a documentary about his upbringing, and sought out former children and staff from the institution, confronting some of the administrators with his horrific recollections. “There were a lot of things they denied. I had to refresh their memories, and then they confessed. What they did was evil but I believe that most of these workers are really remorseful,” he said.

Not everyone who worked in the system appears to be wracked with guilt, however. A former senior member of staff at one of the other facilities run under Ceaușescu’s regime was quoted in a Romanian newspaper as saying: “There was no need for specialists there, because their diagnosis was ‘incurable’.

“Why would you waste the time of a specialist with an incurable person? There are crazy, untreatable children everywhere.

“They destroy everything, and we were doing the work of Sisyphus to change their clothes and sheets. They simply undressed and stood there naked like monkeys.”

For Soare, who spent years investigating the abuses, bringing perpetrators to trial would also have a wider resonance. “The wounds Ceaușescu inflicted upon society are still open and this is part of a process of making peace with your own past,” he said.

Ten days that shook the world

Three weeks after Nicolae Ceaușescu is unanimously re-elected as the general secretary of Romania’s communist party, police evict László Tőkés, a pastor and critic of the leader, from his church in the city of Timișoara. That night, many of his congregation surround his house to protest against the decision.

Support for Tőkés grows and morphs into a general protest against the regime, which is met with force. About 100,000 people crowd into the city’s main square, calling on Ceaușescu to step down.

Despite the growing unrest, tens of thousands of people are bussed to Bucharest’s Palace Square to hear Ceaușescu give his annual speech. However, they begin to chant “Timișoara! Timișoara!”. A shocked Ceaușescu calls over the speakers for the crowd to remain in place, and offers to raise salaries. But his authority is dissipating and the televised images reveal his weakness to the whole country. Crowds flood the city centre and are met with force by the army.

Clashes continue. Ceaușescu and his wife flee an angry mob by helicopter. The Romanian army changes sides and backs the protesters. Ion Iliescu takes over as president.

Clashes continue in Bucharest, in a standoff between different factions that sees the National Salvation Front, led by Iliescu, come out on top. The majority of the revolution’s 1,100 deaths follow Ceaușescu’s departure from the scene.

Ceaușescu and his wife Elena are judged in a military court in the town of Târgoviște, found guilty and immediately executed by firing squad.