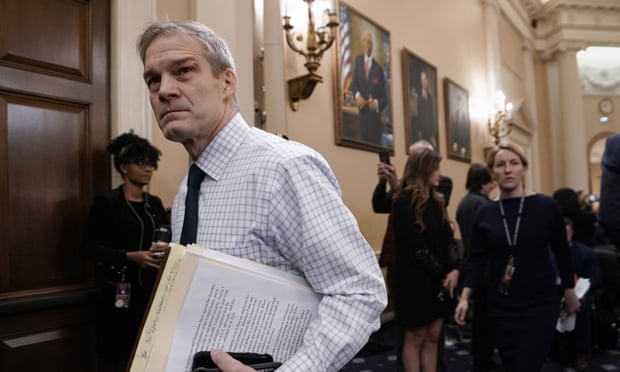 As round two of public impeachment hearings was set to begin on Wednesday, Republicans were expected to resort to procedural objections and high-temperature harangues in an effort to protect Donald Trump.

With the party-line 13-9 approval on Tuesday night by the House intelligence committee of a 300-page report by congressional Democrats describing how Trump abused the power of his office for personal and political gain, the impeachment inquiry has now moved into the hands of the judiciary committee, the last stop in the process before lawmakers would vote on impeaching Trump.

Led by the Democratic committee chairman, Jerrold Nadler of New York, the judiciary committee has historically been the place where articles of impeachment originate. Wednesday’s hearing, which is to feature constitutional scholars testifying on the history of impeachment, is the only one scheduled so far, with more expected. Democrats expect the committee to wrap its work within two weeks, though there is no set calendar.

Republicans, led by the committee’s ranking member, Doug Collinsof Georgia, will try to frustrate that effort by objecting on procedural grounds and foregrounding Trump’s fiercest defenders, including Representatives Jim Jordan of Ohio and John Ratcliffe of Texas, Politico reported.

Also sitting on the judiciary committee is Matt Gaetz of Florida, who made a splash last month when he led a group of Republican lawmakers into the secure basement facility where the impeachment inquiry was proceeding. The Republicans complained of exclusion, despite the participation in the inquiry by dozens of elected Republicans.

Testimony Wednesday was scheduled to proceed under rules familiar from the previous public hearings, with 45-minute chunks of questioning time at the top for the committee leaders and staff, followed by five-minute blocks for each member.

In an interview with the Guardian last month, Gerhardt said the House process had been “extremely fair”.

“I think that because the constitution says the House has the sole power to impeach, there’s no role for the president to dictate how he should be involved, who should bring a lawyer and things like that – it’s left to the discretion of the House, and the House I believe in this situation has been extremely fair,” Gerhardt said.

The White House counsel, Pat Cipollone, informed Nadler earlier this week Trump and his lawyers would not participate in Wednesday’s hearing.

In the tightest time frame of what has been a fleet inquiry, an impeachment vote by the full House could be taken before Friday 20 December, the last day for members to wrap up official business before their Christmas break.