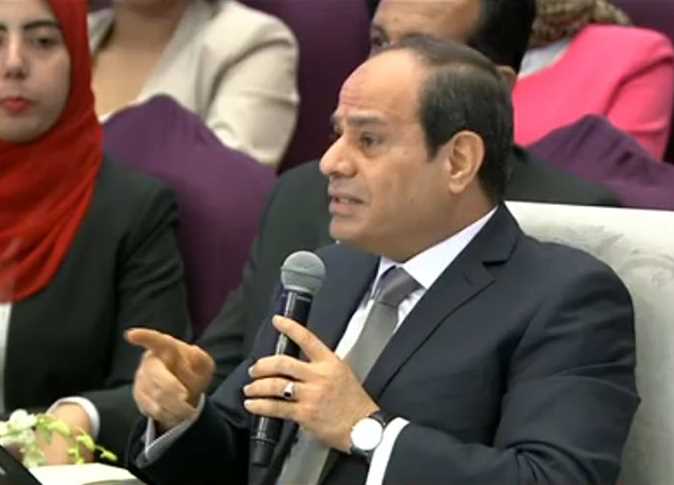 President Abdel Fattah El Sisi asserted that terrorism is a satanic industry and the most dangerous thing about it is using intellect and faith to reach political targets and interests.

Terrorism is a cover up for many targets that some countries seek to reach, They use all its tools against the progress of Man to make their aims come true, President Sisi said in remarks during a session on current challenges of international peace and security here on Sunday within the ongoing 3rd edition of the World Youth Forum.

He also called for reaching a unified stance against states that support terrorism.

The forum is very important as being an opportunity to listen to a variety of people on one subject, he said, adding that youth are the most targeted segment by terrorist organizations.

He addressed the participants saying the aim of this forum is to listen to one another about every single issue that is raised for discussion.

President Sisi stressed that the subject matter of the session is not only about defeating terrorism and the means to achieve this goal but also to discuss and analyze the phenomenon itself. “It is important for you to know, as young people, that terrorism is not a newly-born thing. It has been used over long years to reach political and interest targets,” he said.

“When we seek to reach stability in our country Egypt and establish the aspired development, we are faced with a terrorist operation or two that halt tourism activities – one of the main sources of hard currency of the country – which is equal to around dlrs 15 billion in losses. It is a huge sum especially that we are not a rich state and not a major industrial country and our resources are limited. Therefore, the state faces a huge crisis for a year or two or maybe three until it recovers from the repercussions of such terrorist operations. We then become better than before,” he added.

“Terrorism sponsors are searching and plotting schemes to destroy a country with Egypt’s size whose population exceeds 100 million so as to impose their dictates on it,” he said, stressing that behind every terrorist act there are concealed agendas and demands that the simple ordinary people are unaware of.

“However, politicians and statesmen know all about these hidden targets and the intentions of countries supporting terrorism. We are here speaking about terrorism as a phenomenon that we have to deal with and focus on ways to confront it. We should not mix the papers when we speak about terrorism as we have to take into consideration all aspects, including those related to culture, intellect and the correction of the religious discourse in order to fight it on all fronts worldwide,” he said.