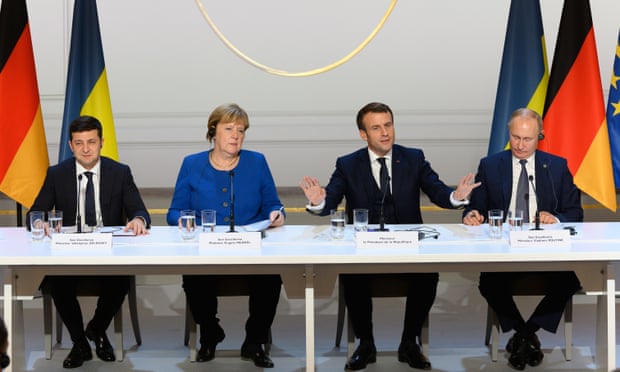 Face-to-face talks between the leaders of Russia and Ukraine have yielded modest progress, with tentative agreements on prisoner exchanges and a total ceasefire, but no political breakthrough to the five-year old conflict in south-east Ukraine.

Monday’s talks were the first meeting between Russia’s Vladimir Putin and Volodymyr Zelenskiy of Ukraine, who was elected in a landslide victory in April and made ending the war one of his campaign promises.

Officials in both countries expected the talks to make little progress towards ending the conflict with separatists backed by Russia’s military, which has left more than 13,000 dead and millions displaced.

Zelenskiy has faced vocal opposition at home to making concessions to Putin under the slogan “No capitulation!”. Putin believes Moscow is negotiating from a position of strength and has shown little inclination to reduce pressure on Ukraine.

In the end, the two men largely stood their ground.

“I don’t know who [beat] whom. I think it would be appropriate to be diplomatic as we’ve just started talking. Let’s say for now it’s a draw,” Zelenskiy said outside the Élysée Palace in Paris where they met for talks with the French president, Emmanuel Macron, and the German chancellor, Angela Merkel.

Putin and Zelenskiy sat for more than an hour and a half in bilateral talks and spoke for several more hours with Macron and Merkel, in a negotiating foursome dubbed the Normandy Format.

Zelenskiy and Putin did not shake hands or publicly acknowledge each other at a press conference after the talks, but the Russian president said he thought relations with Ukraine “were moving in the right direction” and agreed when asked whether he thought there was “a thaw” in relations.

In a joint communique issued after the talks, the sides promised “immediate measures to stabilise the situation in the conflict area”, which will also include efforts to clear mines, an expanded monitoring mission under the Organization for Security and Co-operation in Europe, access for the Red Cross to visit all prisoners and further troop withdrawals. The sides also pledged to meet in four months in Berlin.

Putin also hammered home Russia’s insistence on strict adherence to the Minsk agreements, a 2015 peace deal that has remained difficult to implement and may be politically unviable for Kyiv.

In particular, Putin and Zelenskiy were said to have clashed over the Ukrainian border, which is being held by Russian-backed forces, allowing free movement of people and arms between Russia and Ukrainian territories outside Kyiv’s control. Ukraine has said that other provisions of the Minsk agreements, such as elections in south-east Ukraine, cannot be fulfilled while the border remains open.

As analysts noted, the holding of talks for the first time in three years was itself an important development. “The fact that we sat side by side today … is an achievement,” Macron said afterwards.