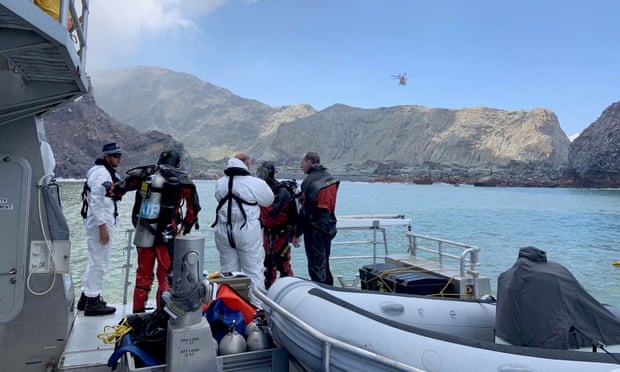 An Australian victim caught in New Zealand’s deadly White Island volcano eruption has died in hospital in Sydney, bringing the death toll from the tragedy to 16.

The man died in Concord hospital almost a week after the deadly blast. It was the first death to occur in Australia following the eruption.

“Officers from Burwood police area command attended Concord hospital following the death of a man after being medically transferred from New Zealand,” NSW Health said in a statement. “NSW Health wishes to pass on our condolences to the family.”

The man’s family requested that his name and age was not released.

The condition of another Australian victim caught in the eruption stabilised in Concord hospital overnight.

Three patients evacuated from New Zealand to the Alfred hospital in Melbourne remain in a critical condition.

There were now three NSW victims in stable conditions at Australian hospitals.

Some 47 people, including 24 Australian citizens and four permanent residents, were on the island when the volcano erupted on Monday.

Ten Australians are now confirmed dead, two are presumed to have died and 12 are still being treated in hospital after being repatriated with severe burns.

Police said on Sunday that Berend and Matthew Hollander, two brothers who lived on Sydney’s north shore, had died in the disaster. They were believed to have been born in the US but were permanent residents of Australia and attended Knox grammar school. Their Australian father, Martin Hollander, and their American mother, Barbara Hollander, are still missing.

Australia’s foreign minister, Marisse Payne, will visit Wellington this week to convey the country’s thanks to the New Zealand government for its efforts in rescuing and caring for victims of the disaster.

A recovery team returned to New Zealand’s White Island on Sunday morning but was unable to retrieve the remains of two people still missing after the eruption.

Police understand eight people were killed on the island, and spent Saturday debriefing the operation and searching nearby waters for the last two bodies.

Mission command firmly believe a seventh body is in the water, and are increasingly convinced the eighth could be too.

However, both Saturday’s water-based search and Sunday’s landing failed to turn up the remains.

“Everyone went out there desperate to find the bodies … it’s been tough going for everybody.

“We understand completely how frustrating it is for loved ones who want the bodies back.”

As of Sunday afternoon, divers were back in the water around the Bay of Plenty island, hoping they could reach a breakthrough.

The situation on the volcano, New Zealand’s most active, remained volatile and dangerous.

The latest update from geological monitoring agency GeoNet left the alert level at two and suggested there was a 30-45% chance of an eruption in the next day.

“This morning at 8am, three helicopters – two commercial helicopters and the police Eagle helicopter – left for Whakaari/White Island with eight police staff on board,” he said.

“Those staff covered a search area where our best information suggested a body could still remain. Unfortunately, we did not locate a body this morning.”

Despite returning back to the mainland empty-handed, police underlined their commitment to the job.

“We have always anticipated recovering all bodies from the island, and we remain deeply committed to that goal, to allow families some closure,” Tims said.