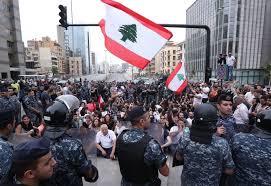 Dozens of protesters clash with parliamentary police near the Nijmeh Square and at the entrance to the street leading to the Lebanese parliament in central Beirut.

The parliamentary police threw teargas at the protesters who gathered late on Saturday in front of the parliament who were attempting to reaching the building.

The Lebanese army sent reinforcements to the area to support the parliamentary forces, Al Arabiya’s correspondent on the ground confirmed.

The protest movement across Lebanon has so far forced the resignation of prime minister Saad Hariri on October 29 and official talks to name his replacement are to start Monday.