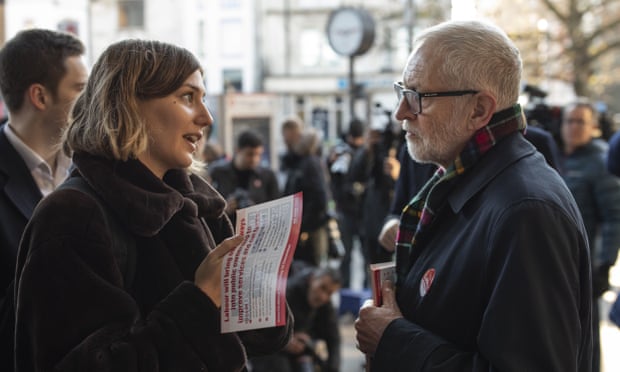 Boris Johnson, Jeremy Corbyn and Sadiq Khan, the major of London, are paying tribute to the victims of the London Bridge attack at a vigil this morning. This is from Sky’s Jason Farrell.

Council tax more likely to go up under Conservatives than Labour or Lib Dems, Institute for Fiscal Studies suggests

The Institute for Fiscal Studies has published a briefing on the Conservative, Labour and Liberal Democrat plans for local government funding. This is not an issue that has attracted much attention in the campaign so far, but it deserves some focus because councils provide vital services – and the gap between what’s on offer from the Tories and Labour is vast.

Although the Conservatives claim to be a low-tax party, under their plans it is more likely that council tax would have to rise, the IFS suggests.

Here is an excerpt from the briefing, which covers plans for local government funding in England.

The money allocated by the Conservatives would not be sufficient to meet rising costs and demands over the next parliament even if council tax were increased by 4% a year, necessitating a further retrenchment in services or unfunded top-ups to the plans set out.

The Labour party has allocated more than enough money to meet rising costs and demands, allowing increases in service provision and quality, although not enough to restore them to 2010 levels. That is true even if council tax were frozen – although Labour has no plans for such a freeze.

The Liberal Democrats have allocated enough money to meet rising costs and demands if council tax is increased by 2% a year – although only if some the funding earmarked for bus services, youth services or homelessness is used to meet these pressures.

Of course, there would be less need for council tax rises under Labour because local authorities would be getting more funding as a result tax increases imposed by Labour elsewhere in the system.

In her BBC phone-in Nicola Sturgeon said she would like to see the SNP represented in the talks with the EU that would take place if Labour formed a government and negotiated a new Brexit deal. This issue came up in response to a question about fishing. Asked if the SNP would want to have someone negotiating alongside Labour on this, Sturgeon replied:

I want to make sure, in any of these discussions, the interests of the fishing industry were absolutely paramount, and that’s a commitment I would make on behalf of the SNP.

When asked if this meant she wanted “someone at the table”, she replied:

I think Scotland should be at the table in any of these discussions, all of the time, rather than being shut out by Westminster. And fishing is an example of the particular interests we have that mean that we should be much more represented.

Fishing is an awkward topic for the SNP because the EU’s common fisheries policy is hugely unpopular with the Scottish fishing industry, and the Conservatives are fond of arguing that the SNP plan to stay in or rejoin the EU amounts to staying in or rejoining the CFP.

Sturgeon said that she wanted to see the CFP “fundamentally changed and reformed”. But she also argued that the Conservatives were misleading fishermen in implying that after Brexit they would get everything they wanted. Access to UK waters for EU fishermen would end up being part of the overall trade negotiation, she suggested.

Nicola Sturgeon, Scotland’s first minister and the SNP leader, has been going a phone-in on Radio 5 Live and BBC News. Asked how she would vote if she live in England in a Labour/Lib Dem marginal, she at first replied that she could not say. She did not like either of them, she said:

I’m not a fan of Jeremy Corbyn’s Labour party. A Labour party right now, given everything the Tories are doing to this county, should be streets ahead …

But she concluded saying she would urge people to vote tactically to keep the Tories out.

What I would say is, if you’re in a constituency where the Tories hold it just now, or the Tories have got any chance of holding it, vote for the party that is best placed to get rid of the Tories, or keep the Tories out.

Asked to justify plans to use funds from vehicle excise duty that had formerly been earmarked for road-building to subsidise cheaper rail fares, McDonald said: “You cannot road-build your way out of a climate crisis.”

He added that concerns over the environmental emergency “is what will be delivering my thinking if I’m going to take over at the Department for Transport”.

The proposal would immediately reduce the price of season tickets and other regulated fares by a third, as well as simplifying the ticketing system across the country, according to Labour.