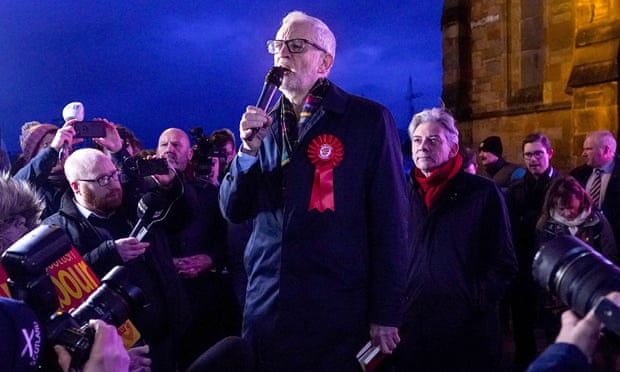 Boris Johnson wins a landmark victory, taking 360 seats, winning over traditional Labour voters in small cities and big towns in Wales, the Midlands and the north of England, while holding steady in Scotland, London and the south of England generally.

The governing party could be on track to gain even more, 50-plus seats, if it takes others talked about as being in play: Dennis Skinner’s seat of Bolsover (Lab maj 5,288), Alyn and Deeside in north Wales (Lab maj 5,235) and West Bromwich West (Lab maj 4,460).

Labour would bear the brunt of losses, falling just short of 220 seats. That would be the worst election result for the party since 1983, making it difficult for Jeremy Corbyn to hang on as leader – while Johnson would have a free rein to complete Brexit at the third time of asking by 31 January.

This is roughly the closest to the prevailing polling, in line with YouGov’s Tuesday prediction of a majority of 28. The Conservatives would end up with 340 seats (up 23) and Labour on 237, slightly ahead of its disappointing 2015 result, but 25 seats down on last time.

Signs this is happening would be if the Conservatives gain Lincoln (Lab maj 1,538), Derby North (Lab maj 2,015), Wakefield (Lab maj 2,176) Wrexham (Lab maj 1,832), but not the seats with larger majorities mentioned in the section above.

The Conservatives could afford to lose two seats in Scotland to the SNP (Stirling and Gordon) and one in London (Chipping Barnet), but would still have a good enough result to allow Boris Johnson to look forward to five years in Downing Street.

After a successful pre-election purge of rebel Conservative MPs, even a majority of 10 or more could easily be sufficient for governing, particularly in completing the first phase of the UK’s exit from the EU.

This familiar scenario kicks in if the Conservatives miss the 326 overall majority figure by a few seats. Boris Johnson could try for a minority government if the Conservatives end up in the low 320s, but anything in the high 310s would leave him theoretically reliant on the DUP, already unhappy with the renegotiated Brexit deal.

The prime minister would remain in post while he tried to form a government, while it would be for the combined opposition parties to come up with an alternative and, if necessary, defeat him in a motion of no confidence sometime before Christmas.

On this scenario, the Conservatives end up even, probably meaning that gains made in the northern half of England and all of Wales, are offset by losses elsewhere. The Tories do take seats such as Barrow and Furness (Lab maj 209) and Peterborough (Lab maj 607 at the last general election), but not Ipswich (Lab maj 831) or Stockton South (Lab maj 888) on Teesside.

Labour, meanwhile, makes more gains in the south-east, taking Southampton Itchen (Con maj 31) and Hastings and Rye (Con maj 346), only loses four seats in Scotland and hangs on in Canterbury (Lab maj 187) and Stroud (Lab maj 687). Overall the party is still down, at 253 seats, but remains competitive.

To complete the picture SNP gains four from the Tories, the last of which is Ochil and South Perthshire (Con maj 3,359), and the Lib Dems pick up Richmond Park (Con maj 45) in London. In Northern Ireland, gains by the SDLP in Belfast South and Foyle and by the Alliance party in North Down help with the arithmetic.

It depends a little on the wider results picture, but if the Conservatives fall below the low 310s Boris Johnson could not form a government just with the DUP. The prime minister might try to talk to the SNP and the Lib Dems but the initiative would move to the opposition to see if it could form a government led by Corbyn.

It is possible for Labour to lead a coalition if the party ends up with the same number of seats it has now, on 262. The party wins Norwich North (Con maj 507), gains Northampton North (Con maj 807) and Milton Keynes South (Con maj 1,725), offsetting any seat losses elsewhere.

Winning Putney (Con maj 1,554) and Watford (Con maj 2,092) would be particularly helpful, as would restricting any losses to the Conservatives to a couple of seats in the north of England.

The SNP also gains Angus (Con maj 2,645), the Lib Dems St Albans (Con maj 6,109) and there is a surprise win for an independent in East Devon. Beyond that there is limited headroom for the SNP, but if the Lib Dems can really pull off wins in Winchester (Con maj 9,999), or even Esher and Walton (Con maj 23,298), then the Tories are in trouble, and Boris Johnson out of a job.