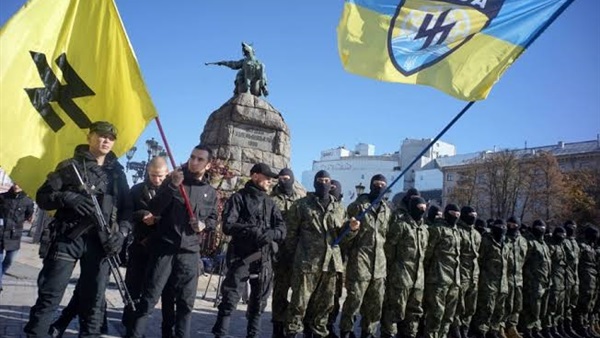 Far right seeping out of Europe and into Asia

Protests erupted in Hong Kong six months ago against a law allowing the country to deport convicts to China. However, the protests have given the kiss of life to the far right in Asia, which took root and grew in the United States and Europe.

A large number of masked people writing far-right slogans appeared within the Hong Kong protests. They call themselves “Gonor”.

This was the first time far-right groups in Europe unveiled their presence in Asia. They posted photos and videos showing this presence, using social media.

The Azov Battalion appeared in Ukraine for the first time in 2014. It was initially a combat group affiliated to the Ukrainian Ministry of the Interior.

The battalion was created to fight separatists affiliated to Russia in the southeastern part of Ukraine. Nonetheless, the same battalion sought outside expansion by recruiting people in other countries.

The battalion founded a liaison office with the aim of recruiting fighters outside Ukraine. It also set up training camps and centers where its leaders delivered lectures on its ideology.

The Soufan Group, which is specialized in intelligence analysis and international security, said the Azov Battalion follows the same tactics of jihadist organizations. The group, it said, has an advantage, namely the ability to move freely inside Europe.

Far-right extremists succeeded in forming cross border terrorist cells. The members of these cells move freely between the countries where there is support to them. They also depend on the same tactics of the jihadists who are out only to spread anarchy and violence.

The Azov Battalion and other similar groups succeeded in recruiting a large number of people in Europe and Asia, benefiting from the freedom some countries give them.

According to a previous report by The Reference, the perpetrator of a March 15, 2018 attack on a mosque in New Zealand had received training at one of the camps of the Azov Battalion in Ukraine.

From Europe to Asia

Far-right groups did not limit their activities to the European continent. They succeeded in moving these activities to Asia as well.

According to the Grey Zone site, some of the commanders of the Azov Battalion travelled to Hong Kong to offer training to the demonstrators there. The training was mainly in resisting police.

The elements calling themselves “Gonor” had received training at the hands of the commanders of the Azov Battalion, the Soufan Group said.

European security agencies have recently realized the danger posed to far-right groups. This came after busting some cross border groups in the continent. However, the US has not changed its policy towards far-right groups, although some of these groups staged attacks in a number of states.

Far-right terrorism is the largest security danger facing the US, the Soufan Group said. As a threat, the far right is even more dangers than Islamist terrorism, the group added.