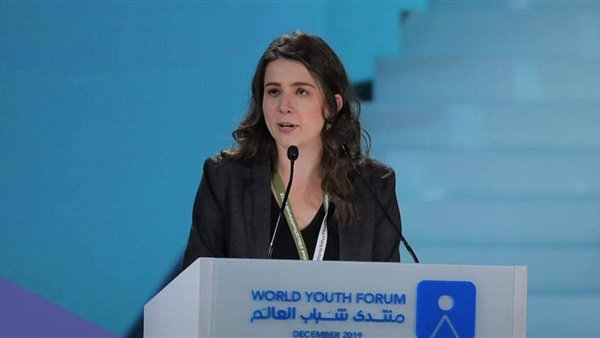 Over four days, the forum discussed important issues such as food security, environment and climate, the blockchain, artificial intelligence, the union for the Mediterranean, women’s empowerment, art and cinema.

In the closing ceremony “Pinto” delivered strong massages via her speech in front of the Egyptian President Abdel Fattah al-Sisi, to all women in the world.

Pinto said in her speech the women have to keep seeking for their dreams and never to despair.

Pinto talked to Al-Bawaba news about her visit to Egypt, WYF and her participation for the first time in this global event.

The Brazilian human rights activist said in the interview that she was invited to attend the WYF to be a speaker in a session on empowering women, which she considered it as a great opportunity to talk about what is going on in Brazil her homeland.

Pinto has been invited to be a speaker in the closing ceremony.

In her speech during the closing ceremony said “We need to be thankful for spaces like the World Youth Forum, spaces that give us the opportunity to meet regardless of who we are and what country we came from”.

Pinto expressed her admiration for the forum message, as the WYF adopted the idea of gender equality. She also explained that the women participation rate was equal to men, in addition to the presence of young people of different nationalities. She concluded that “this was Humanitarian forum”.

Pinto talked about her participation in many workshops and sessions in the forum, and the opportunity to exchange ideas with many young people.

She indicated that she met many participants from South Africa, Sudan and the United States of America, as well as people interested in education issues and specialists on youth empowerment.

Pinto told Al-Bawaba news that “it was definitely quite impressive, and was perfect”.

She added “I did not imagine that I would be invited to attend the forum, there were many applicants, in fact a wonderful feeling to be among the chosen and among the 7000 people who participated in this global event”.

There is no other country except Egypt organizing such a huge event, the idea of bringing young people from many countries around the world together.

“I love Egypt, as this is my second time here, I am really happy with this great opportunity hoping to be able to return soon” she said.

The WYF is a golden opportunity for Youth in light of Al-Sisi’s belief in Youth.

She pointed out that the government is keen to communicate with Youth, who represent a large proportion of the population, and they are the locomotive that leads the state.

She talked about the benefits from the discussions within the sessions, for example she discussed the blockchain with truly qualified people from many different countries from different perspectives.

“The forum is a valuable opportunity to exchange vision on the most important technology issues” she added.

WYF are one of the greatest manners that President Al-Sisi created to support the ideas of youth.

The presence of the president in all sessions of the youth forum gives positive energy to all young people and confidence.

For me, it was a great opportunity to meet the president personally, and I was greatly impressed by his investment in youth and his support for the forum.

When I had the opportunity to speak to him, he was taking notes, and that was very interesting to me.

I always had a dream to visit Egypt, and in Latin America we learned in primary schools that Egypt represented the beginning of civilization. So I know about Pharaohs, Tutankhamun, the pyramids.

Before 3 years ago I decided to spend a vacation in Egypt, so I went to Cairo, Luxor and Aswan and took a trip in the Nile, and when I visited Sharm El Sheikh this year for the forum, I found it completely different from Cairo it is amazing and perfect for relaxing, and I really had a good time.

For me, more work needs to be done faster than before, to get more skills, with more participation.

I have already started some partnerships with my colleagues, and I will return to Brazil in an effort to make these partnerships real. I also will think about what I should put on the next forum.

Women need to do more for education, which means informal and formal educational groups that discuss more information.

We also need to expand spaces around raising awareness and browsing information on websites and research and everything related to women’s rights.

It is really important to see the information and know the rights, and also to face all issues related to early marriage, or prevent girls from education.

Some organizations in the Middle East neglect their main purpose which is to support the rights of women and the poor and focus only on the right to protests.

I work as a women’s rights activist around the world, and Brazil is one of the countries with the most violence against women.

So this field is the most relevant to my life and my professional life, and it relates to my study, as I graduated from law school.

As for the Middle East, they need to move forward in women’s programs that focus on women.