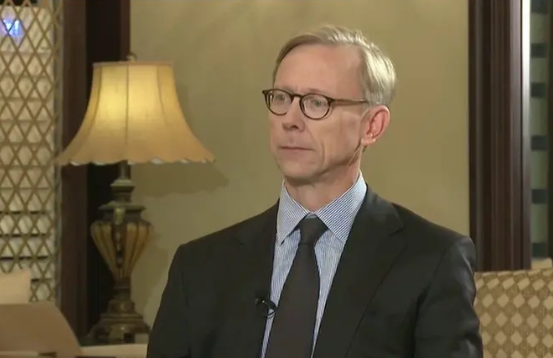 Tighter US sanctions are weakening Iran’s grip on Yemen, Lebanon and Iraq: Hook

The recent tightening of US sanctions on Iran has weakened the regime’s grip on Iraq, Lebanon and Yemen, raising the prospect of reform and peace across the region, America’s top Iran advisor told Al Arabiya in an exclusive interview.

The Trump administration has imposed a “maximum pressure” campaign – increasing targeted sanctions on the Iranian regime since leaving the Obama-era nuclear deal in 2018, which has succeeded in decimating its industrial sector, reduced its funding of conflict across the Middle East and offers hope for resolution of some of the region’s most long-standing conflicts, US Special Representative for Iran Brian Hook said in an interview in Saudi Arabia.

“We are sanctioning Iran on an almost weekly basis and there is still plenty left for us to do. And, unfortunately for the Iranian regime, this is the price that they are paying for an expansionist and revolutionary and violent foreign policy that has caused so much suffering,” said Hook, mentioning September’s attack on Saudi Arabian oil facilities, which the US has attributed to Iran, and attacks on Saudi Arabia by the Iranian-backed Houthis.

Hook said the US administration is making it harder for Iran to conduct foreign interference operations as “Iran doesn’t have the money that it used to.”

“This is money that the regime spends in places like Lebanon, Syria, Iraq, Yemen,” said Hook.

The Trump administration’s oil sanctions on Iran, which Hook described as unprecedented, have led to “a complete collapse of Iran’s oil sector.” Hook said US sanctions have collapsed Iran’s petrochemical, industrial metal, and precious metals sectors, as well. Meanwhile the administration announced Thursday that it imposed sanctions on Iran’s construction sector.

US President Donald Trump’s decision in May 2018 to withdraw from the Iran nuclear deal, known as the Joint Comprehensive Plan of Action (JCPOA), has given “enormous leverage” to sanction Tehran, according to Hook.

“We’re going to keep imposing sanctions on Iran until we’re able to get a new and better deal to replace the Iran nuclear deal that we left,” said Hook.

Saudi Arabia, the first country to support Trump’s decision to withdraw from the JCPOA, has borne the brunt of Iran having the largest missile inventory of any state in the Middle East, according to Hook. He said the US has responded to Iranian attacks by providing its ally with military assistance.

“These [Iranian] missiles find their way…into Saudi Arabia…After getting Iran’s oil exports to zero, there have been a number of attacks here in Saudi. We [The US administration] have increased the number of troops in this region by 14,000 since May and in October, we announced another 3,000 forces to Saudi Arabia alone,” said Hook.

Hook said the maximum pressure campaign isn’t limited to Iran, but countries like Russia and China.

“We have sanctioned Russia for its complicity in helping to illegally move Iranian oil to Syria. Some of [China’s] private companies started to import Iranian crude oil and they did not have a waiver to import that oil. And so we sanctioned them. This is a message to any country in the world, if their companies are considering importing Iranian crude oil, it’s not worth the risk,” said Hook.

Besides economic pressure, Hook said the US’ diplomatic isolation of Iran is spreading internationally.

“We have seen a number of Iranian diplomats expelled from Europe for conducting terror operations or terrorist attempted attacks. Morocco has severed diplomatic relations with Iran. We have seen a number of countries, especially the UK, France and Germany, identify Iran by name as responsible for attacking Saudi Arabia on September 14,” said Hook, adding that more countries need to identify Iran as the country behind the Saudi Aramco attacks.

While Yemen’s Houthis claimed responsibility for the attacks, the international community largely rejected the claim.

“When Iran asked the Houthis to claim responsibility for the attacks…It was a mistake for the Houthis to do that. I think they recognized it. They were embarrassed by it,” said Hook.

Hook said Iran’s strategy in Yemen is to do “what they accomplished 40 years ago in Lebanon with Hezbollah.”

“Iran has no legitimate interests in Yemen. And yet here, here they are in the middle of the civil war using this proxy to attack Saudi Arabia. They would like to turn the Houthis into their proxy right on Saudi’s southern border so that they’re able to attack at will – through the Houthis – Saudi Arabia, Israel, UAE,” said Hook.

Hook blasted Tehran’s leadership as being “a corrupt religious regime that robs its own people blind” to pay for their proxies in Iraq and Lebanon, where recent demonstrations have called for Iranian presence to leave the countries.

“It’s no surprise that these same proxies [in Lebanon and Iraq] are as corrupt as the Iranian regime…We’re seeing these protests against corruption and a lot of the frustration and anger that we’re seeing and protesters is directed at Iran and its proxies,” said Hook.

Iran has accused the US and Arab states of stoking unrest in Lebanon and Iraq, as demonstrators in the countries call for reforms and the end of corruption.

“The Iranian regime and its proxies oppose these reforms because Iran and its proxies, wherever they go, always prioritize ideology and terror over the welfare of the people in that country,” said Hook.