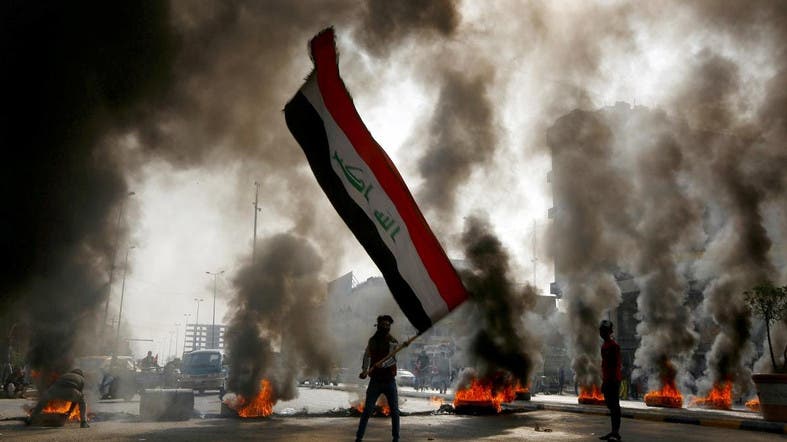 As the southern Iraqi city of Najaf and the Dhi Qar province continue the three days of official mourning over those killed in the past two days of protests, an Al Arabiya correspondent reported that demonstrators are closing several bridges in the city of Nasiriyah on Saturday.

He stated that demonstrators in Nasiriyah closed three major bridges on Saturday morning, adding that a number of demonstrators continued to stage a sit-in in front of the police headquarters of Dhi Qar, which witnessed violent clash with the security forces on Friday.

Iraq’s semi-official Human Rights Commission said in a statement on Saturday that those responsible for the killings of protesters must be brought to justice and that it would gather evidence for prosecution.

The statement did not acknowledge the prime minister’s resignation.

The International Committee of the Red Cross urged a halt to rising casualties.

“Firearms and live ammunition must only be used as a last resort,” it said in a statement.

The Commission had warned on Friday evening of a new massacre in the province of Dhi Qar, calling on protesters, tribal elders and clerics to intervene urgently to defuse the crisis.

The Commission called on security forces to exercise restraint and for demonstrators to keep to peaceful protesting.

Provincial governments of Najad and Dhi Qar had declared three days of mourning on Friday after a wave of violence in the two southern provinces.

Seventy protesters have been killed and hundreds more wounded in the cities of Najaf and Nasiriyah, the capital of Dhi Qar, since Thursday due to clashes with security forces in the bloodiest incident of popular protests that began in early October.