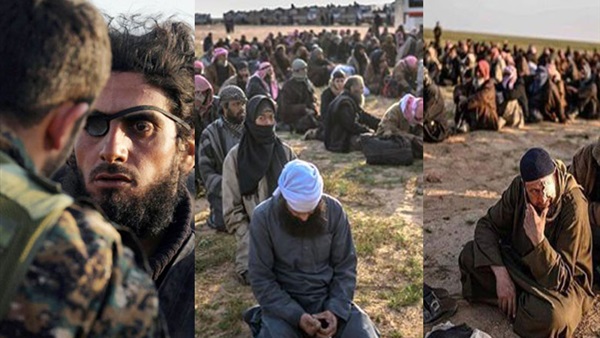 Europe fears the return of ISIS members detained in Turkey to their countries of origin, as the regime of President Recep Tayyip Erdogan uses them as blackmail against European countries. A Swiss newspaper warned that the Europeans were not prepared to receive ISIS terrorists deported from Turkey, stressing that this file deepens the rift in relations between Brussels and Ankara.

“The European Union has long ignored the problem of European ISIS operatives and the possibility of their return to the continent,” the Swiss German-language newspaper Neue Zürcher said in a report on Thursday, November 14, adding, “Now Turkey is spreading salt on European wounds and deporting some of them to their countries of origin.”

On Friday, November 8, Turkish Interior Minister Suleyman Soylu stated that his country will return ISIS detainees to their countries of origin starting Monday, November 11, adding that their number reaches 1,200 and 20% of them are Europeans.

The Turkish move has stirred controversy in several countries between supporters and opponents. Armin Schuster, interior policy spokesman of the Christian Democratic Union (CDU), said that his country is ready to receive the German returnees, who will be intensively interrogated. On the other hand, Stephan Thomae, deputy leader of the Free Democratic Party (FDP), criticized the situation for the lack of uniform measures so far in dealing with ISIS returnees, adding that the country needs a plan for the matter to be organized and managed.

In contrast, Kurdish-origin Sevim Dagdelen, deputy leader of the Left Party, warned that the security authorities could not arrest these individuals upon arrival in the country since they do not have sufficient evidence to convict them.

In France, Paris insisted on a judicial mechanism by which French returnees, after being transferred from Syria, Iraq and Turkey, would be tried, and it would only retrieve about 100 children who had been in detention camps. The German and French governments both reject the return of ISIS elements because they are not prepared to face the danger of the lack of harmony with civilians and the possibility of terrorist operations returning again.

Ankara has not specified to which foreign countries it would send operatives. However, Iraqi Foreign Minister Mohammed Ali al-Hakim told a news conference on October 17 that the number of elements is very large, belonging to about 72 countries.

Turkish President Erdogan resorted to using his ISIS detainee card to blackmail the European Union and pressure them to achieve political and economic gains. He threatened to open the gates for terrorists to go to Europe if the EU did not retract its position on Turkey, especially following the European condemnation of the Turkish invasion of northern Syria and the imposition of sanctions on Ankara for the attacks on Syrian territory and conducting unauthorized excavations off the coast of Cyprus.

There is no uniform European law to deal with detainees if they return, but they are likely to remain in detention for long periods until a mechanism is established to punish them under European law.

The problem of return

Turkish affairs researcher Muhammad Rabi al-Dehi told the Reference that the file of ISIS detainees poses a great threat to the European Union and has been the cause of disputes between the EU member states. Some support the return of detainees, while others reject such a proposal, demanding that they should be tried where they committed terrorist crimes. However, Turkey has been continuously threatening to send ISIS detainees back to their countries of origin whenever its relationship with the EU sours.

Dehi explained that the Turkish president is extorting European countries in order to collect funds to conceal his regime’s economic crises that came as a result of invading Syria, as well as to punish European countries after they condemned the invasion.

Erdogan is well aware that the idea of ​​ISIS members returning represents a direct threat to European national security, so he is using this card to put pressure on the EU to support Ankara financially and politically, Dehi said.

According to Europol estimates, the number of Europeans who belong to the organization reaches up to 5,000, not including the children brought up by ISIS. The idea of ​​rehabilitating them and reintegrating them into society will not guarantee results. If Turkey releases them without handing them over to their respective country’s authorities, they will pose a major threat to security.