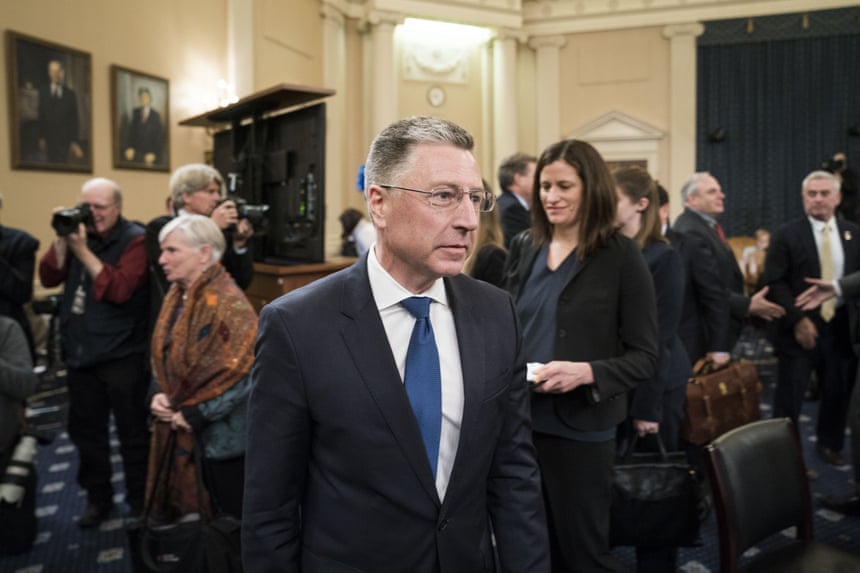 Two witnesses in the impeachment inquiry have described their concern over an “unusual” call between Donald Trump and the Ukrainian president in July, in which Trump ignored official talking points about fighting corruption to instead “demand” an investigation tied to Joe Biden.

“What I heard was inappropriate and I reported it,” said Lt Col Alexander Vindman, a Ukraine adviser on the National Security Council. “I did so out of a sense of duty.”

Vindman and Jennifer Williams, a foreign policy adviser to the vice-president, Mike Pence, became the first public witnesses to offer a direct description of the 25 July call in which Trump asked Volodymyr Zelenskiy for a political “favor”.

“It was improper for the president of the United States to demand a foreign government investigation of a US citizen and a political opponent,” Vindman said.

In a further blow to Trump and his defenders, a witness requested by Republicans, the former Ukraine envoy Kurt Volker, said the investigations Trump requested of Zelenskiy were based on “conspiracy theories” and that “the allegations against Vice-President Biden were self-serving and not credible”.

The House intelligence committee questioned the witnesses at the opening of a blockbuster week in which nine witnesses are expected to testify about the suspension last summer of US military aid for Ukraine and Trump administration attempts to get Zelenskiy to announce political investigations.

Trump has said the request for investigations sprang from a desire to address corruption in Ukraine. That excuse was eroded badly on Tuesday, as Vindman testified that in the July phone call with Zelenskiy and an earlier call, Trump ignored talking points steering him to bring up anti-corruption efforts in Ukraine.

“The president can choose to use the talking points or not, he’s the president,” Vindman said. But what Trump spoke about instead on the second call – investigations of Biden and the gas company Burisma – sparked Vindman to action.

“Without hesitation, I knew that I had to report this to the White House counsel,” he said. “I had concerns and it was my duty to report my concerns to the proper people in the chain of command.”

Before he saw an account of the call, Volker said, he thought he and others were pursuing an investigation of Burisma that did not involve a Biden angle. “In retrospect, I should have seen that connection differently,” Volker said, “and had I done so, I would have raised my own objections”.

“I don’t think that raising 2016 elections or Vice-President Biden, these things that I consider to be conspiracy theories … they’re not things that we should be pursuing as part of national security strategy with Ukraine.”

Republicans have argued that the Trump administration never directly tied military aid or the prospect of a White House visit to the announcement of investigations. But Vindman and Volker also provided the first public testimony about a scene in which Gordon Sondland, the ambassador to the European Union, did just that.

Sondland continued to press the request for investigations of “2016 elections, Biden and Burisma” in a second meeting, Vindman said.

“I stated to Ambassador Sondland that this was inappropriate and had nothing to do with national security,” he said.

Volker and Tim Morrison, a senior National Security Council (NSC) official, testified in the afternoon. All four witnesses were previously deposed in closed-door meetings with the House intelligence committee, which is leading the investigation.

The Connecticut Democrat Jim Himes asked Vindman if he would call himself a “Never Trumper”.

An active-duty army officer who came to the US from the Soviet Union at age three, Vindman appeared in his dress uniform, bearing a combat infantry badge and a Purple Heart medal, bestowed when he was wounded in Iraq.

In a dramatic opening statement – with his twin brother Yevgeny, who serves on the National Security Council, seated behind him – he said his ability to testify about the president without fear for his life spoke to his father’s wisdom to move the family to America.

“Dad, this is proof that you made the right decision 40 years ago,” he said. “Do not worry. I will be fine for telling the truth.”

Answering the New York Democrat Sean Maloney’s question about why he wasn’t worried, Vindman said: “Congressman, because this is America. This is the country that I have served and defended, that all of my brothers have served. And here, right matters.”

“We have learned nothing new in today’s illegitimate ‘impeachment’ proceedings,” she said.

Paul Rosenzweig, a senior fellow at the R Street Institute, who was senior counsel to Kenneth Starr in the Whitewater investigation during the Clinton administration, told the Guardian that Republicans had been struggling to mount an effective defense.

“The factual development is continuing to put the Republicans in a position of defending a difficult set of facts, and they haven’t figured out a way to do that yet,” Rosenzweig said.

Trump appeared pleased by the testimony offered by Volker and Morrison, who were more skeptical than previous witnesses have been of the assertion that the president had engaged in wrongdoing.

“A great day for Republicans, a great day for our Country!” Trump tweeted after the hearing, which ended nearly 12 hours after it began and just over 12 hours before Wednesday’s hearing – expected to be the most consequential of the week’s events – was due to begin.