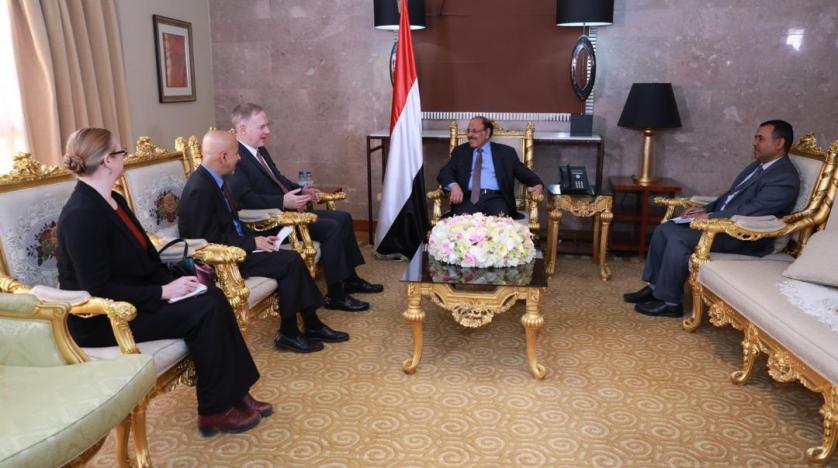 Yemeni government officials intensified their diplomatic activities as they prepare to implement the first steps of the Riyadh agreement.

Yemeni Prime Minister Dr. Maeen Abdulmalik Saeed and a ministerial team are expected to return Tuesday to the interim Yemeni capital, Aden where they should resume their work in line with the Saudi-sponsored agreement signed last week to end a crisis in the war-torn country’s south.

Before his departure, Abdulmalik discussed Monday with UK Ambassador to Yemen Michael Aron the latest developments in Yemen, including the Riyadh deal.

President Abd-Rabbu Mansour Hadi had met in Riyadh on Sunday with the G20 ambassadors accredited to Yemen to review the latest developments and challenges.

“We need your support to implement the agreement in its specific times,” he said.

“We have started to do so by issuing directives to all state organs to immediately start implementing it,” Hadi told the ambassadors, who congratulated him and the Yemeni people on the signing of the agreement.

They also praised the efforts of Saudi Arabia and the UAE for their efforts to restore security and stability and achieve peace that the Yemeni people aspire to.

“The signing of the agreement in Riyadh is a historic step and represents an achievement that Yemen needs to achieve comprehensive peace according to the three reference,” they said, according to the Saba news agency.

They tackled bilateral ties and the efforts made by the two countries to counter the Iranian plot in Yemen and the region.

“The Riyadh agreement is a move toward reinvigorating the state’s institutions and authorities,” Mohsen said. He hailed the significant efforts by the Saudi leadership in bringing all Yemeni political parties together to confront the Iran-backed Houthi militias and reinstate the official authority.

For his part, the American diplomat reiterated his country’s support for the legitimate Yemeni leadership and efforts to achieve peace.

Also on Monday, Foreign Minister Mohammad al-Hadhrami sat with Ambassador of the European Union in Yemen Hans Grundberg to discuss the latest developments in Yemen and boost relations between Yemen and the EU.