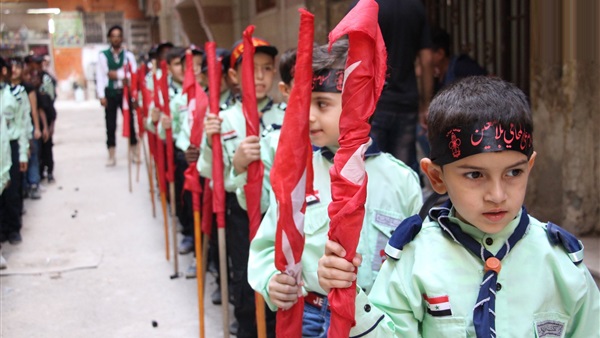 In the footsteps of ISIS Cubs of Caliphate: Iran controls children of Syria

An Iranian institution operating in Syria, whose purpose is to recruit and mobilize children and stuff them with the Khomeinist doctrine, to be followers of the mullahs and future soldiers, and perhaps also the leaders of Syria is called the “state scouts”, as a form of ideological investment, in the Iranian strategy in Syria.

Recently, Iran opened a state scouting branch in Deir ez-Zor province, which is of great importance to the Iranian strategy in Syria. Deir El-Zerro is a central point on the Tehran-Baghdad-Mediterranean coast road.

The pro-Syrian Sada Deir ez-Zor network published a picture of the facade of the institution, or center, on Sunday, November 10, 2019. It said it was opened today under the name of “Scout” and is sponsored by the Popular Committee for Syrian-Iranian Friendship in Deir ez-Zor.

Iran’s focus on Syrian youth also comes as part of a long-term plan to change Syria’s identity and dye it as Khomeinist.

The State Scout is part of the mullahs’ strategic plan to control the Syrian population, which began with the outbreak of the civil war in Syria, when Tehran established the State Scout Group, which is one of the most important organizations interested in “funeral, ideological, political and military guidance” for children.

Through its various activities, which are concentrated near the shrines belonging to the Shiite doctrine, according to the Khomeinist theory known as Wilayat al-Faqih, the scouts groups spread in every school and follow the doctrine.

In Syria, Imam al-Mahdi’s scouts, led by Iran’s Revolutionary Guards commander Hassan Shatri, were killed on February 12, 2013, nicknamed “Hossam Khosh Noyes,” in a sectarian way loyal to Iran, along with scouts of the same name, belonging to Lebanese Hezbollah militias.

The aim of the Scout of the Wilayah, or the Scout of Imam al-Mahdi, is to “create an Islamic generation, according to the perception of the velayat-e faqih, and to abide by the teachings of Iran’s supreme leader Ali Khamenei.”

By following the page of the State Scouts of Syria, he has embeded new cultural and religious concepts inside them, the most important of which is to portray the Scout as the “homeland”.

Its president is the supreme leader in Iran, Khamenei and he has put his images and Iranian flags in every corner, not to mention the glorified phrases.

The Iranian Islamic Revolution has set among its objectives “to raise awareness and establish a generation of young people who understand the Islamic cause, and not to be dragged behind the colonial hand extended to the roots.”

It also organizes activities and exhibitions, participates in pro-Assad rallies, and the Mahdi Scouts in Syria, trains children militarily, as well as instills religious education, especially in the minds of children, by attending religious classes in Husseinieh.