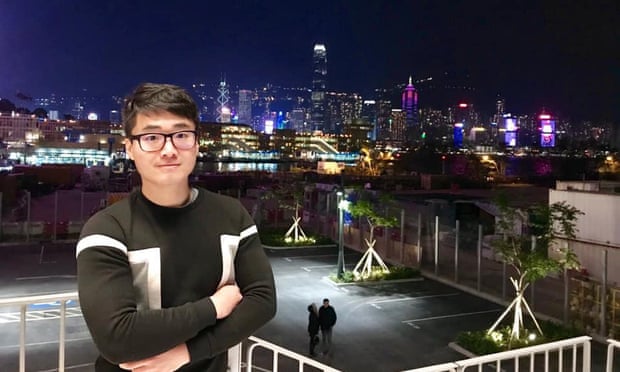 A former employee of the British consulate in Hong Kong has alleged he was tortured while being detained in China, during a 15-day ordeal in which he said he was branded “a British spy and secret agent” and held in solitary confinement.

The UK foreign secretary, Dominic Raab, summoned the Chinese ambassador to demand an explanation after Simon Cheng, a Hong Kong citizen who worked for the British government for two years, went public with his account of repeated physical and mental torture.

Cheng, 29, was detained for 15 days in August while trying to return to Hong Kong from a trip in mainland China. In an interview with the Guardian he said he was tortured for days before being forced to falsely confess that he and the British government had played a role in the pro-democracy protests in Hong Kong, which were largely peaceful at the time.

During lengthy interrogations in windowless rooms, Cheng said he was called “an enemy of the state” and “a British spy and secret agent” working for the UK government by his captors, who threatened him with subversion and espionage charges.

Cheng, held in solitary confinement from the second day of his detention, was also pressed to falsely confess that he “had been used by others”. He was forced to say that the British government was masterminding protests in Hong Kong and that he had secured financial aid and resources for the protesters, who the Chinese authorities insisted were “rioters.”

He was put in what is known as “tiger chair” – a metal chair with bars which disables a detainee’s movements – and barred from wearing his glasses until he was released. He was not allowed to contact his family or a lawyer.

Police told him he had been reported for “soliciting prostitutes” and said that if he “cooperated” he would face a lesser punishment of administrative detention, which normally involves 15 days of detention, otherwise he would be given the much more severe punishment of criminal detention. Cheng said he had no choice but to make a false confession.

At times during his detention he was handcuffed, shackled, blindfolded and hooded, and barred from wear his glasses, which made him feel suffocated and nauseated. Secret police grabbed his hair to force him to unlock his phone by facial recognition.

Later, he was taken out of the detention centre and taken to an unknown location, where he was hung while blindfolded and hooded, handcuffed and shackled on a steep “x-cross” and forced into a spread-eagled position for hours.

His captors also ordered him to squat and pose in other fixed positions for hours. When he failed to maintain the pose they ordered, they would beat his knee joints with spiked batons, making him shiver with pain. They also yelled verbal abuse at him during the whole torture process, saying he was an “intelligence officer sent by the UK” and “worse then shit.”.

Cheng said he was subjected to nights of sleep deprivation and if he fell asleep he was forced to sing the Chinese national anthem.

Cheng said that during his detention he was made to believe that the Chinese authorities would charge him with subversion, armed rebellion and rioting, espionage or treason. He said he was terrified that he might never be released.

It started off as just another day for Cheng when he got on the high-speed train in Shenzhen to return to Hong Kong on the night of 8 August after a day trip for work. He knew something was not right when he arrived at the Chinese immigration auto check point at the Hong Kong’s West Kowloon high-speed railway station, and the gate did not open.

He was swiftly taken to Shenzhen, a city that borders Hong Kong, and interrogated by Chinese police. That was just the beginning of his ordeal in custody.

Cheng’s treatment echoed China’s treatment of political and human rights activists: in a widespread round up of human rights lawyers in 2015, at least 300 legal professionals and activists were held in incommunicado detention of six months, where they were kept in solitary confinement, subjected to physical and psychological abuses and denied family and lawyer access.

Raab said he was “shocked and appalled by the mistreatment Cheng suffered while in Chinese detention, which amounts to torture.”.

“I summoned the Chinese ambassador to express our outrage at the brutal and disgraceful treatment of Simon in violation of China’s international obligations. I have made clear we expect the Chinese authorities to investigate and hold those responsible to account,” he said. “The FCO is working to support Simon and his fiancee, including to come to the UK.”

The Foreign Office said it had offered Cheng and his fiancee a two-year visa to come and live in the UK, and that it was possible he would be allowed to stay longer if he wished to do so after that point.

As a locally-employed staff member of the consulate, Cheng does not enjoy diplomatic immunity.

During the interrogation, it is understood that officials were able to access his phone using forcible methods. Cheng had access to some protesters’ phone numbers and details of chat groups used by demonstrators.

The FCO said it had reviewed its advice to staff travelling into mainland China, but was not willing to discuss whether the seizure of Cheng’s phone and extraction of details of British consulate staff had compromised UK security or led to any changes in personnel.

Tom Tugendhat, the Conservative chair of the foreign affairs select committee in the last parliament, said: “Reports of torture by the Chinese of an employee of the British consulate in Hong Kong are extremely serious. There has been a pattern of accusations by the Chinese embassy against the UK concerning UK interference when the only real diplomatic interference that has been occurring has been by the Chinese with its Confucius centres and activities in British universities as well as other incidents listed in the recent foreign affairs select committee report. It all reveals a pattern of autocratic behaviour being exercised. Britain must stand up and defend itself against such abuses.”