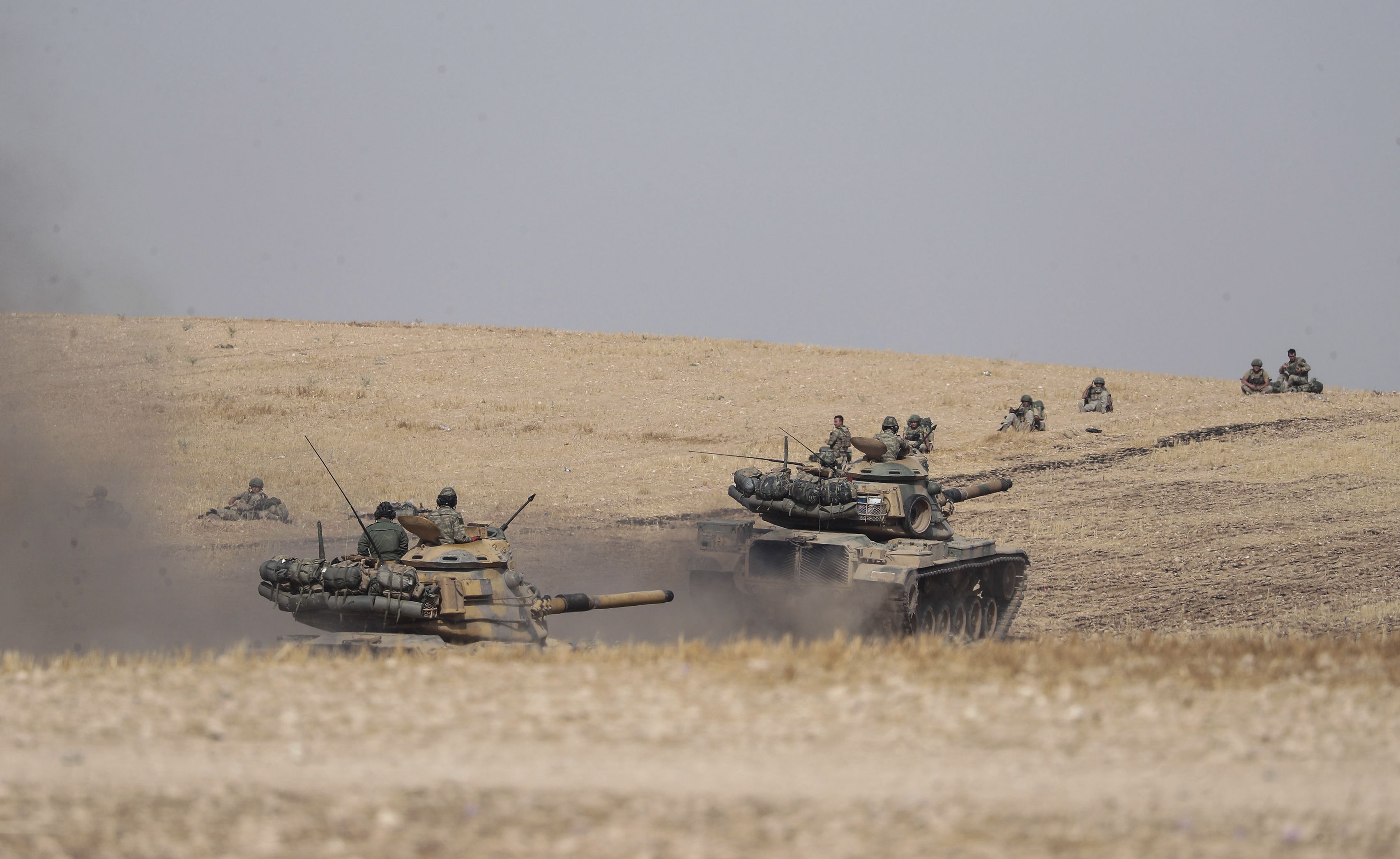 The U.N. Special Envoy for Syria says there must be a cessation of hostilities between Turkish troops and Kurdish fighters as the world is “extremely alarmed by the humanitarian consequences of the crisis.”

Geir Pedersen spoke to reporters after meeting Wednesday with Foreign Minister Walid al-Moallem saying that he wants to make sure that the fighting in the north is not threatening “the sovereignty, independence and territorial integrity of Syria.”

Pedersen said there is only a political solution also to the crisis in the northeast and “we are appealing on all parties to participate in this.”

The U.N. envoy said he is very optimistic that the committee that will draft a new constitution for Syria will start meeting at the end of the month.

He said it will work “as a door opener for the broader political process that is necessary to find a solution for the crisis in Syria.”

The Kremlin says it expects Turkey’s military action in Syria to be proportionate to its declared goal.

Kremlin spokesman Dmitry Peskov said Wednesday that Russia respects “Turkey’s right to take measures to ensure its security” but also expected it be “proportionate to the task.” He wouldn’t comment on how long Moscow believes the Turkish offensive should last.

Russia moved quickly Tuesday to fill the void left by the U.S. troops’ withdrawal from northern Syria, deploying its military to act as a buffer as Syrian government forces moved north under a deal with the Kurds, who have sought protection from the Turkish offensive.

Erdogan made the comments in Parliament on Wednesday amid pressure for him to call a cease-fire and halt its incursion into Syria, now into its eighth day.

Erdogan made clear Turkey would not bow to pressure and would press ahead with the military operation until Turkish troops reach a depth of some 30 or 35 kilometer inside Syria.

He also called on the world to support Turkey’s battle against Kurdish groups it considers to be “terrorists” for links to an insurgency within its own borders.

Russian Foreign Minister Sergey Lavrov says that Russia is committed to mediating between the Syrian government and Turkey in order to ensure security in the region, as a Turkish offensive against Kurdish fighters in northern Syria enters its eighth day.

Lavrov said in remarks carried by Russian news agencies on Wednesday that Moscow will also continue to encourage Syria’s Kurds and government to seek rapprochement after the withdrawal of U.S. troops from the northern border area.

Lavrov also blamed the United States and Western nations for undermining the Syrian state, thus “pushing the Kurds toward separatism and confrontation with Arab tribes.”

Lavrov during his visit to Iraq last week met with the leaders of the Kurdish autonomous region and said that Moscow is sympathetic to their need for autonomy.

Russia has been the most powerful backer of Syria’s President Bashar Assad in the eight-year-old civil Syrian war.

France is calling on European and other members of the coalition fighting the Islamic State group in Syria to regroup as the U.S. abdicates its leadership role in the region.

French Foreign Minister Jean Yves Le Drian said in an interview on French television channel BFM Wednesday that France is notably now looking to Russia, given their “common interests” in defeating IS in Syria.

He said the American military withdrawal from northeastern Syria is forcing European leaders to re-examine their alliance with the U.S. in the region.

Le Drian said France’s “own security is at stake” amid the Turkish offensive against Syrian Kurdish fighters.

He said that “to accept this invasion” was giving IS “an open door” to return, as the chaos could allow thousands of Islamic State fighters detained in Kurdish-run prisons to escape.

Russia has moved to fill the void left by the U.S. in the conflict, deploying its forces toward Syria’s border with Turkey.

Turkey’s president says he won’t halt its military offensive in northeast Syria, despite growing pressure and sanctions from NATO allies.

Speaking to a group of journalists, Erdogan said he told President Donald Trump: “We could never declare a ceasefire,” adding that Turkey wouldn’t negotiate with “terrorists.”

Erdogan said he was “not concerned” by sanctions imposed on Turkey.

Turkey launched its offensive against Syrian Kurdish fighters it considers terrorists after Trump announced he was withdrawing U.S. troops.

Russia has signaled its role as de facto power broker in the conflict, deploying forces near the border following America’s pullout.