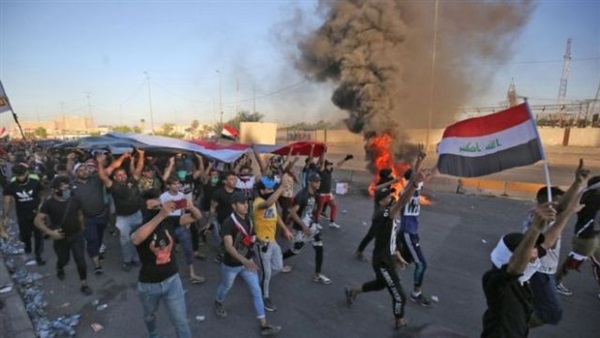 Khamenei’s enemies: Iraqis rebel against Tehran’s mullahs and their puppets in Baghdad

Day after day, protests are increasing, organized by Iraqis to demand the departure of Iran’s tails in power and against the rule of sectarian militias affiliated to the mullah regime in Tehran, which is hijacking the political decisions in their country.

As the death toll increases due to the bullets of the terrorist militias, Iran is trying to calm the scene after failing to quell the protests by force and violence.

Iran’s Supreme Leader Ali Khamenei believes that enemies are trying to drive a wedge between the two countries, according to a tweet he published on Monday, October 7 after the bloody protests in Iraq.

“Iran and Iraq are two peoples whose hearts and souls are linked, and this bond will grow stronger day by day. The enemies seek to differentiate between them, but they are helpless and their conspiracy will have no effect,” Khamenei posted on Twitter.

Iran’s official IRNA news agency confirmed that this statement from Khamenei comes as a comment on the recent events inside Iraq, in which more than 100 people have been killed since the outbreak of clashes on Tuesday, October 1 between angry demonstrators and security forces.

The Baghdad Post quoted informed cources as saying that Abu Mahdi al-Mohandes, the deputy of the Iranian-backed Popular Mobilization Forces, appealed to Khamenei to save the militias in Iraq and asked him to send armed militias to quell the uprising.

According to the newspaper, the request received an urgent response and various militias entered through the Mundhiriya border crossing in eastern Diyala province wearing civilian clothes, under the pretext of the Arbaeen pilgrimage to visit Imam al-Hussein.

An Iranian regiment also entered the capital Baghdad from the Mehran crossing, despite the closure of the border between the two countries. Hadi al-Amiri’s Fatah Alliance, Iran’s arm in Iraq, called on the authorities in Baghdad to favorably answer Khamenei’s directives and vow to take every effort to kill the popular uprising.

According to sources, these forces are led by terrorist Quds Force commander Qassem Soleimani.

But the protesters had to demonstrate at night to stay away from the bullets of militia snipers, and they tore up images of Shiite religious figures, such as Khamenei and others known to be loyal to Tehran, in opposition to their control of the country and the rampant corruption.

Iranian affairs researcher Mohammad Alaeddin said that the situation in the region is not working for Iran, because its expansionist imperialist project in the region has been exposed to its inability to keep up with the challenges of its economic situation.

Alaeddin added that popular anger in Iraq is increasing because of the collapse of the health, education and economic sectors and increased unemployment due to Iranian slaves controlling the decisions in their country.