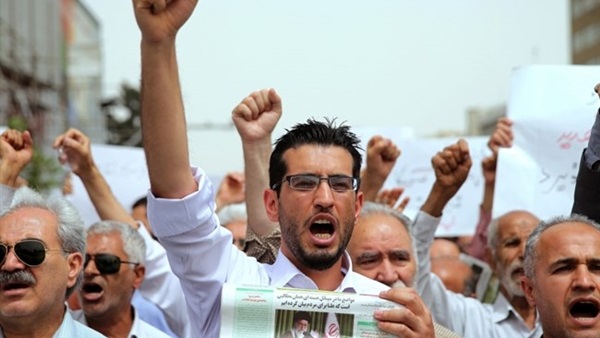 The Iranian regime is highly worried that massive rallies would hit Iran after people in the village of Chenar Mahmoud in the town of Lordegan, Chahar Mahal & Bakhtiari, demonstrated after hundreds of citizens contracted HIV.

A number of demonstrations erupted in many parts of the country in protest of the worsening economic conditions. The police have detained 14 workers who were on their way to meet MPs in Tehran.

Farah Pahlavi, the last queen of Iran, has urged the Iranian people to continue protests against the mullah regime. She has reiterated in a statement that the Iranian nation would rise again.  Regarding Sahar Khodayari, a female football fan who recently committed suicide by self-immolation, she said:”Sahar Khodayari is the burning symbol of the dreams cherished by half of Iran’s population. Iranian women have been fighting for forty years to achieve the least of their absolute rights.”

“The name of Sahar Khodayari, as the symbol of Iranian women seeking their rights, will never be forgotten,” Queen Farah said.

Researcher Mohammad Benaya, an expert on Iranian affairs, said that the situation in Iran is would erupt anytime, noting that the protests in Iraq worry Iran’s mullah regime. “If Iraqis get what they want, the Iranians would take to the street too,” Benaya told THE REFERENCE.

“The Iranians are angry due to restrictions imposed on public and personal freedoms in the country. The mullah regime is targeting minorities and activists. Moreover, the economic and living conditions are worsening in Iran, where corruption is deep-rooted,” he explained.

“The Iranian regime has lost the street in Iran, not only in Iraq. It has lost dearly over the past two years. In Iraq, especially in the Shiite areas, the Iranian flag was burned down during popular rallies,” he said, adding that Tehran has lost popularity in Iraq.