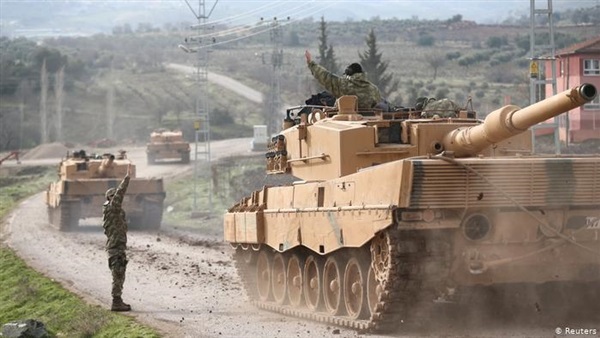 International condemnation of the Turkish attack on northern Syria

A number of countries have criticized the military operation launched by Turkish President Recep Tayyip Erdogan on northern Syria, which he announced the start of on Wednesday, October 9 to target what he said were “terrorist organizations.”

A Turkish security official said the military operation in Syria had started with air strikes and was supported by artillery and howitzers.

The Egyptian Foreign Ministry condemned Turkey’s aggression against Syria, describing the move as a flagrant and unacceptable attack on the sovereignty of a brotherly Arab state and exploiting its current circumstances and developments in contravention of the rules of international law.

The Foreign Ministry statement stressed the responsibility of the international community, represented by the UN Security Council, to confront this extremely dangerous development that threatens international peace and security and to stop any efforts aimed at occupying Syrian territory or conducting “demographic engineering” to modify the demographic composition of northern Syria.

The statement also warned of the consequences of the Turkish move on the unity and territorial integrity of Syria or the course of the political process in the country in accordance with Security Council Resolution 2254.

Egypt called for an emergency meeting of the Arab League to discuss these developments and ways to preserve Syria’s sovereignty, unity and territorial integrity.

The Italian prime minister said that Turkish military operations in northern Syria hurt civilians and undermine stability in the region, while the Netherlands decided to recall Turkey’s ambassador after the attack. Germany, meanwhile, said that the Turkish bombardment in Syria threatens to bring ISIS back again.

France also strongly condemned the Turkish attack in Syria and demanded a Security Council meeting, which in turn called for a session on Thursday, October 10 to discuss the Turkish operation in a special session at the request of the council’s European members.

For months, Turkey has been waging an offensive in areas east of the Euphrates controlled by the SDF – the main partner of the US-led international coalition fighting ISIS.

Kurdish fighters have been the spearhead of the international attack on ISIS, having succeeded in driving the terrorist organization out of large swathes of northeastern Syria, gaining the support of Western countries, and now overseeing the detention camps holding ISIS fighters.

But on the other hand, Ankara considers the Kurdish fighters to be terrorists just like ISIS, viewing them as an extension of the PKK, which has been waging an insurgency against Turkey since 1984.

Ankara plans to establish a “safe zone” in northern Syria, with the practical goal being to establish a strip 30 km deep at a length of about 500 km extending from the Euphrates to the Iraqi border and separating the Turkish border from the positions of the Syrian Democratic Forces.